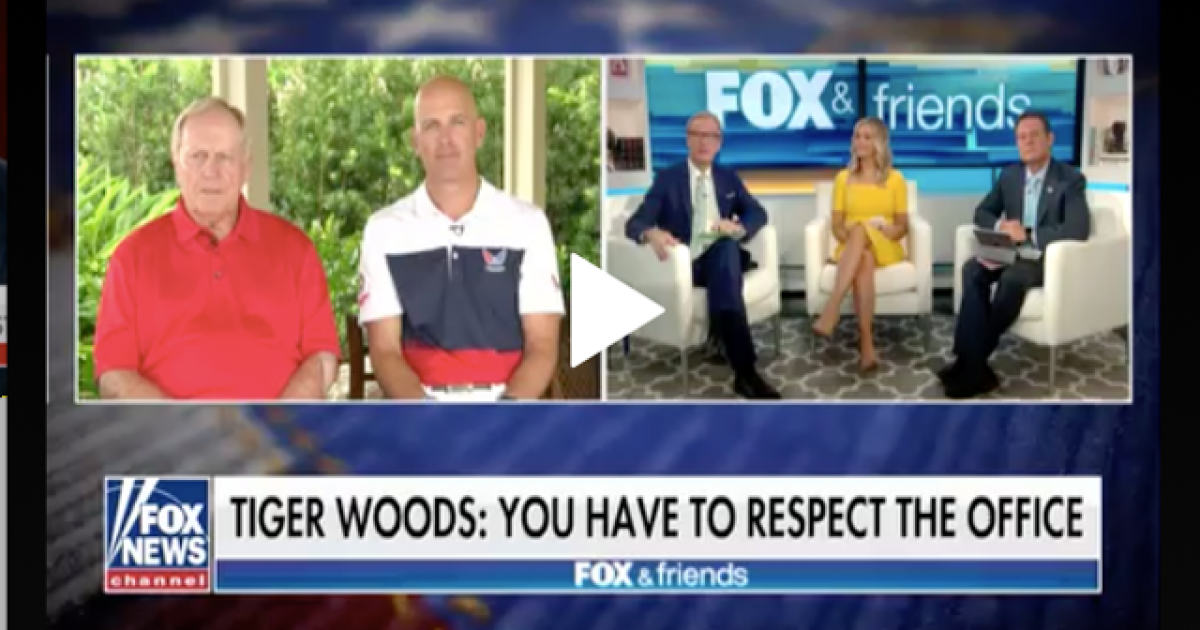 Legendary golf master Jack Nicklaus recently made an appearance on “Fox & Friends,” where he was asked his thoughts on Tiger Woods’ comments about President Trump.

Nicklaus backed up what Woods’ said, which basically amounted to “respect the office,” even if you disagree with the individual who is occupying it.

Woods shot down questions over the weekend about his relationship with President Trump, urging people to respect the office of the president, while declining to comment on political matters.

At the end of a tournament in New Jersey, Woods was asked if he had anything to say regarding his “friendly relationship” with Trump.

How many strokes do you think Kai is going to give @tigerwoods and @realDonaldTrump ??? #golf pic.twitter.com/QyW9M6g2sb

Nicklaus said that Woods – whose 14 major tournament victories are second to Nicklaus’ all-time mark of 18 – handled the question well and that he agrees with his answer.

“No matter who’s president — whether it was Barack Obama or Donald Trump — I think you respect the office, and I’m much in Tiger’s camp on that,” he said.

Jack Nicklaus: “No matter who’s president, whether it was Barack Obama or Donald Trump, I think you respect the office.” pic.twitter.com/qKVlBMzzfr

President Trump tweeted his appreciation for Woods’ comments on Monday, saying that he is “very smart” and didn’t give in to the “Fake News Media.”

The Fake News Media worked hard to get Tiger Woods to say something that he didn’t want to say. Tiger wouldn’t play the game – he is very smart. More importantly, he is playing great golf again!

It seems the sport of golf is plumb full of classy athletes who aren’t foolish enough to take the bait the mainstream media dangles in front of them. Perhaps the NFL ought to hire Woods and Niklaus to come and do some consulting for their players, you know, to help them avoid making fools of themselves by disrespecting their flag and their country.

The media tries very hard to make everything political, and allowing them to pigeonhole you with these kind of questions opens the door to alienate part of a person’s fanbase. Woods obviously recognizes this and takes a middle road.

Let’s hope his strategy rubs off on athletes in other major sports around the country.