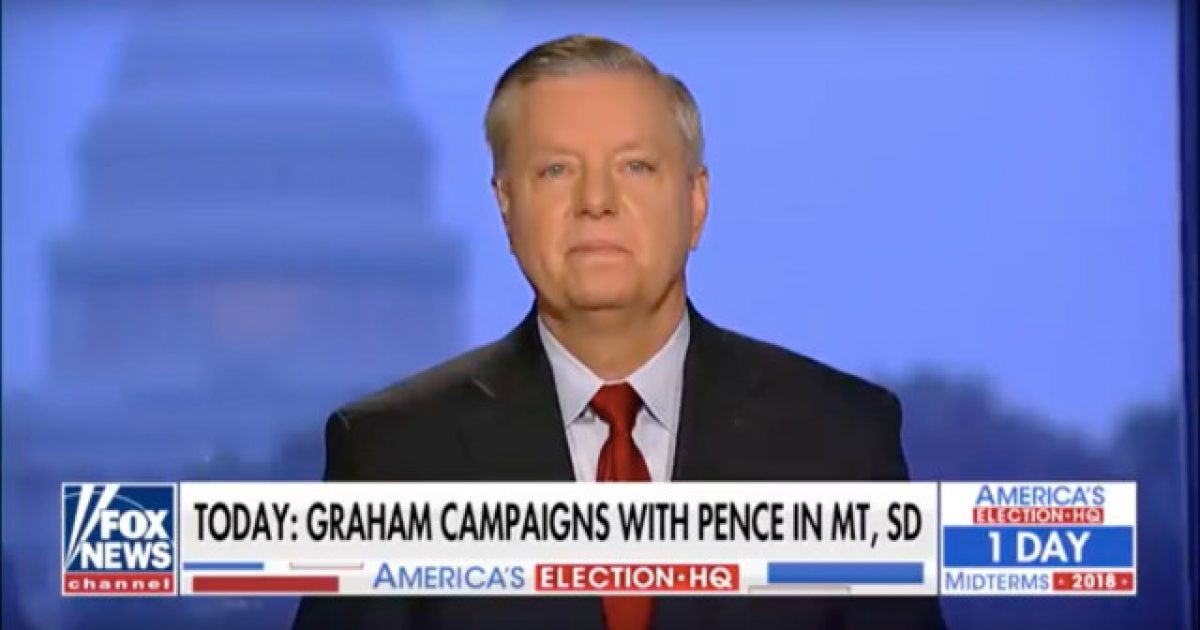 Sen. Lindsey Graham appeared on “Fox & Friends” Monday where he dropped some comments about where he sees the Republican Party right now, and from his perspective, there’s a lot for folks on the right to celebrate.

Host Brian Kilmeade, noting that Graham had become one of the GOP’s leaders in promulgating the message the party needed for victory, said, “What is your message going forward?”

To remind people what happened to Brett Kavanaugh, that the Democrats will do anything to win. They do not accept the fact that President Trump won; talk about the caravan and a growing economy, get our vote out. I’ve never seen Republicans more united than I do now. I think we’re going to kick butt in the Senate and the House is too close to call. The last 30 days has been a nightmare for Trump-state Democrats, between Kavanaugh, the caravan, and a growing economy.

Host Steve Doocy remarked to Graham that Graham’s new policy of campaigning against Democratic senators was triggered by Graham being “hacked off” by the Kavanaugh confirmation hearings.

Graham agreed: “Yeah. I just said enough is enough. I voted for both of their nominees, Sotomayor and Kagan. And all of these Trump-state Democrats voted against Kavanaugh, they voted against the tax cuts, and it’s pretty clear to me they’re not going to return the way I do business, so it’s now time to clean house and put people in the Senate that can help President Trump change America, put conservative judges on the Court; cut your taxes and win a war we can’t afford to lose. Yeah, they brought out a different side of Lindsey Graham and I hope all these candidates that voted against Kavanaugh, hope they lose.”

Host Ainsley Earhardt asked, “Why did you choose to campaign in Montana and South Dakota? Why those two?”

Graham quipped, “Because that’s where the Vice President’s going and I don’t have my own plane.”

While President Trump himself has a tendency to be a rather divisive figure, even in the Republican Party — mostly due to his habit of crossing over the line with rhetoric — it seems the good he’s done in office, and his keeping a good percentage of his campaign promises has enabled conservatives to unite together with shared purpose.

We’ve all experienced the negative impact of having radical leftist leadership in the White House, and while a good portion of Republicans may not agree with a lot of Trump’s words or his personal lifestyle prior to taking office, they recognized our nation was in big trouble and put aside those things long enough to work together and start putting things right again.