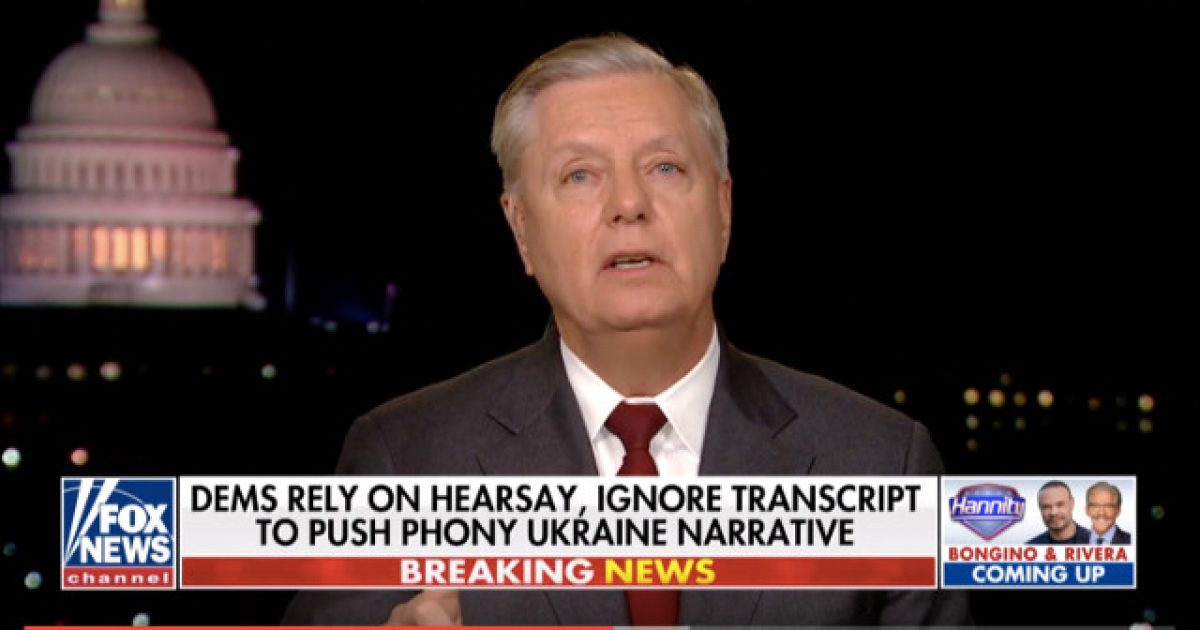 On Tuesday evening, Sen. Lindsey Graham made an appearance on Sean Hannity’s Fox News program to chit-chat about the impeachment hearings that kicked off on Wednesday, where he stated that he wouldn’t be watching the hearings because the whole thing is a “threat to the presidency; I don’t want to legitimize it; it’s un-American; it denies the basics of due process.”

Hannity started the exchange by noting that Graham had said if there were no due process in the impeachment inquiry, the issue would be dead in the Senate.

Graham answered, “I think there’d be a danger to the presidency in the future for us to legitimize what’s going on in the House. There’s no civil proceeding in America, no criminal proceeding in America that denies a person to tell their side of the story by calling witnesses except in the House. And every American deserves the right to confront their accuser. That’s not being done in this case. So I don’t want to legitimize this because it’s a threat to the presidency.”

“How long does it take to dispose of that?” Graham said.

Hannity went on to speak about how all of the benefits that were given to former President Bill Clinton during his impeachment have been denied Trump.

“Every consideration that was given Bill Clinton, Bill Clinton’s lawyers, the minority party, are all denied here because at the end of the paragraph it all says the same thing, it goes, “Yeah, at the discretion of the chairman.” He said he wanted a whistleblower; Republicans gave a list. They said no to every Republican witness and now they’re cherry-picking the two witnesses that they think will be the most favorable to them and ignoring all the ones that destroyed their narrative. Who in the Senate, what committee in the Senate could call witnesses and investigate Hunter and Joe because I identify the laws I believe Joe Biden broke?”

“Well, the allegation against Hunter Biden is that he had a conflict of interest serving on the board and that Joe Biden weighed in to have the prosecutor fired because he’s getting close to his son, Their State Department activity talking about the conflict of interest, and there is a reasonable investigation to be done here. The Foreign Relations committee has jurisdiction over the State Department, but let me get back to the point you just made: What’s happening the the House is basically un-American. No American, including Donald Trump, should be accused of misdeeds without confronting their accuser, which is the whistleblower, and no American should be denied the capacity to tell their side of the story by calling witnesses to explain their defense,” Graham responded.