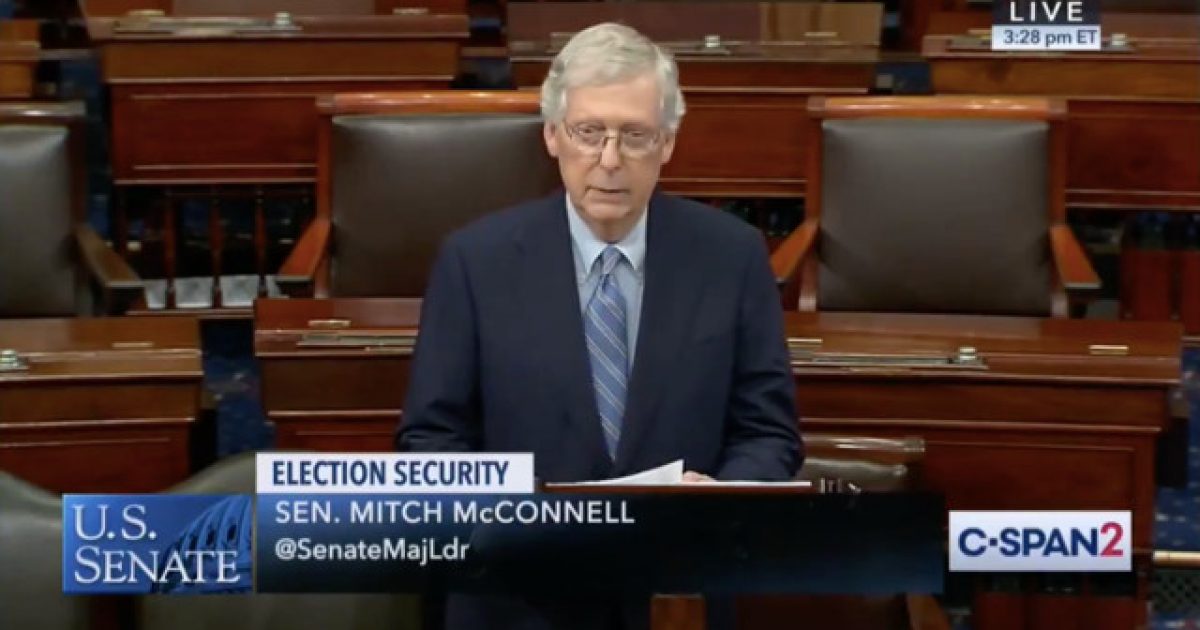 Senate Majority Leader Mitch McConnell took MSNBC and The Washington Post to task Monday, from the Senate floor, for publishing smears that promote the insane idea that McConnell is some sort of Russian asset that’s infiltrated our government.

McConnell’s impassioned speech came in response to attacks from over the weekend where he was labeled “Moscow Mitch” after left-wing columnist Dana Milbank wrote an op-ed about McConnell blocking a highly partisan Democrat election reform bill last week.

“I don’t normally take the time to respond to critics in the media when they have no clue what they’re talking about,” McConnell said. “But, this modern-day McCarthyism is toxic, and damaging, because of the way it warps our entire public discourse.

“Last week I stopped Democrats from passing an election law bill through the Senate by unanimous consent, a bill that was so partisan that it only received one Republican vote over in the House,” McConnell said. “My Democratic friends asked for unanimous consent to pass a bill that everyone knows isn’t unanimous and never will be unanimous. So I objected.”

“Over the last several days I was called unpatriotic, un-American, and essentially treasonous by a couple of left-wing pundits on the basis of bald-faced lies,” McConnell continued. “I was accused of aiding and abetting the very man I’ve singled out as an adversary and opposed for nearly 20 years: Vladimir Putin.”

No one has done more to sow discord than them

McConnell went on to say, “Now, at least [MSNBC] is honest about what it offers, and it isn’t journalism. Immediately after the host finished his angry string of false claims [calling] me un-American, another panelist chimed in to applaud the remarks and here’s what he said: ‘We’re at war. It’s time for the Democrats to wake up and we’re not necessarily going to play fair.'”

“Let’s remember how deep MSNBC waded into the conspiratorial fever swamp over the past 2 years.They gave airtime to one guest who has publicly tweeted … that a former White House adviser was close to being executed for espionage and that Chief Justice Roberts had sent the marshal of the Supreme Court to the White House to threaten the president.”

Mitch McConnell slams MSNBC: “They gave airtime to one guest who has publicly tweeted that a former White House adviser was close to being executed for espionage and that Chief Justice Roberts had sent the marshal of the Supreme Court to the White House to threaten the president” pic.twitter.com/1daMR3ArIa

The left-wing media has become nothing more than a propaganda wing for the Democratic Party and it’s clear they’ve now become so desperate to get hits in on the Republican Party before things get hot and heavy in the 2020 election cyle, they’ve sunk to new lows, entertaining wild conspiracy theories to smear McConnell and also try drawing in new viewers to their networks.

It’s sad that this is what passes for a free press these days, but that’s exactly what’s happened. Journalistic integrity has been trashed in favor of helping the left push their agenda down the throats of the American people and what’s worse, there’s no concern for the lives and souls that could be destroyed in the process.

Former US Attorney For The District Of Columbia Drops Bombshell, Democrats Starting To Sweat