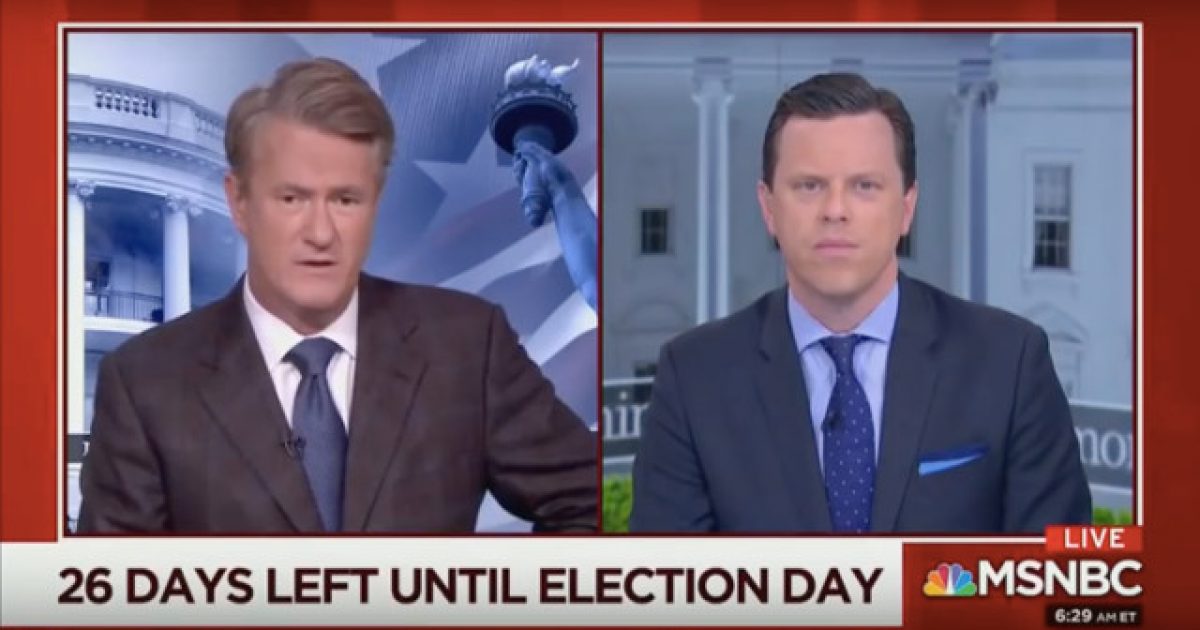 Joe Scarborough, host of MSNBC’s “Morning Joe” and an ardent critic of President Trump, has been on a roll lately, making a number of statements that aren’t likely to sit well with his Democrat co-workers at the network. However, they are brimming with common sense that the Democratic Party would do well to listen to.

Earlier in the week, Scarborough nailed the mainstream media for it’s failure to ask hardball questions concerning the letter penned by Christine Blasey Ford that was strategically leaked in order to aid Democrats in their quest to derail the confirmation of Brett Kavanaugh to the Supreme Court.

Well, Scarborough actually went even further on Thursday by publicly admitting that Democrats’ disgraceful and unfair treatment of Kavanaugh is turning out to be a “disaster” for the party.

While Scarborough noted that, as Donald Trump’s election demonstrated, polling data four weeks out from the vote doesn’t mean a candidate’s a lock, he stressed that anyone honestly looking at the numbers after the shameless smear campaign against Kavanaugh must acknowledge that it’s turned out to be a political “disaster” for Senate Democrats, who need to win all seven of the true toss up seats in November to gain the 51-seat majority. As of right now, the chances of that happening are very, very slim, with polls trending toward Republicans in key states, including Tennessee and Arizona.

As Scarborough and his guests note, the polling data for key Senate seats is not looking good for Democrats. As The Daily Wire reported Thursday, the so-called “Kavanaugh Effect” appears to be having a major impact in the red and purple states. If the Democrats fail to win any of the “toss ups” seats, according to Real Clear Politics’ pollsters (who give Democrats 44 safe seats and Republicans 49), they will not win the Senate. Two of those seats are open seats in Tennessee and Arizona, both of which have moved dramatically in Republicans’ direction post-Kavanaugh:

Tennessee’s open seat is one of those “toss ups,” but surging support for Republican Marsha Blackburn is moving it rapidly in the direction of “leaning” Republican. Democrat Phil Bredesen once enjoyed a five-point lead, but after the Kavanaugh chaos, multiple polls show Blackburn leading by a significant margin. A Fox News poll found Blackburn ahead by 5 points last week, while a CBS News/YouGov poll found her leading by 8 points. A New York Times Upshot poll this week found Blackburn ahead by 14 points.

Bredesen created a stir when he came out in support of Kavanaugh before the vote. Many have interpreted it as a political ploy, with a recent undercover video suggesting as much, but it appears to not have worked in his favor, with many Democrats expressing disgust at the move.

At the end of the day, Scarborough is absolutely right about this. The way the Democrats treated Kavanaugh is likely going to have a pretty big negative impact on the November midterms and all but seals the fate of the “blue wave” they were hoping for next month.

In reality, Americans still care a whole lot about due process, realizing the horrific consequences that could’ve befallen our nation’s justice system had hearsay been used to punish a man for a crime there’s no proof of.

If Democrats want to win, they are going to need to change strategies.