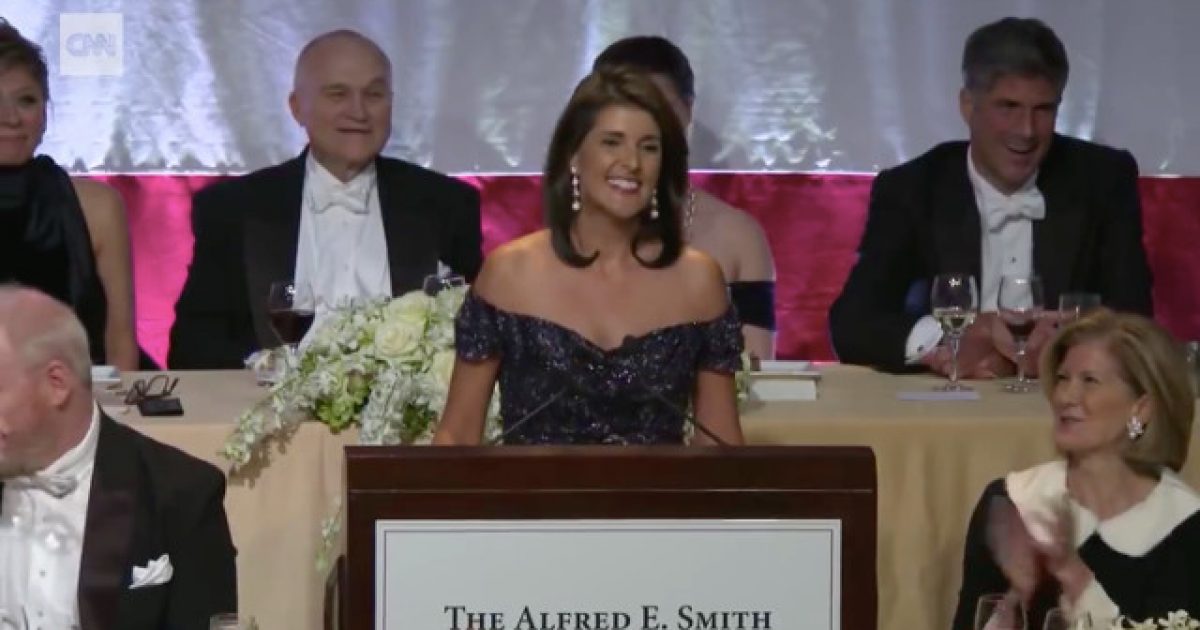 U.S. Ambassador to the United Nations Nikki Haley had a rip roaring good time at a charity dinner on Thursday night, being sure to take advantage of an opportunity to poke a little fun at Sen. Elizabeth Warren and her DNA test results, which completely exploded in her face earlier this week.

Haley made her zinger while she attended the annual Alfred E. Smith Memorial Foundation Dinner, an event designed to help raise much needed funds for underprivileged children.

Haley recently announced her resignation from her post as U.S. Ambassador to the U.N. effective at the beginning of the new year.

“But I do understand why you invited me,” Haley said. “Two years ago President Trump was here and he made some waves with his remarks, apparently no one here could have predicted that.”

“So last year, last year you went with Paul Ryan, who’s a boy scout,” Haley continued. “And that’s fine, but a little boring. So this year, you wanted to spice things up again, right?” Haley said. “I get it. You wanted an Indian woman, but Elizabeth Warren failed her DNA test.”

The crowd erupted in laughter.

“Actually when the president found that I was Indian-American, he asked me if I was from the same tribe as Elizabeth Warren,” Haley added.

Haley’s comments come hot on the heels of Warren’s PR disaster involving the release of her DNA test results which were supposed to confirm that she had Native American ancestry, but actually sort of proved the exact opposite. The results show that Warren is 0 percent Native American might possibly — not the word “possibly” — be between 1/64th and 1/1024 Mexican, Colombian, or Peruvian.

The debacle has resulted in the 2020 presidential hopeful being mocked mercilessly by folks on both the right and the left, including a condemnation from a descendent of Pocahontas and the Cherokee Nation.

WATCH: Boy Falsely Accused of Sexual Assault Has a Few Words for His Accuser