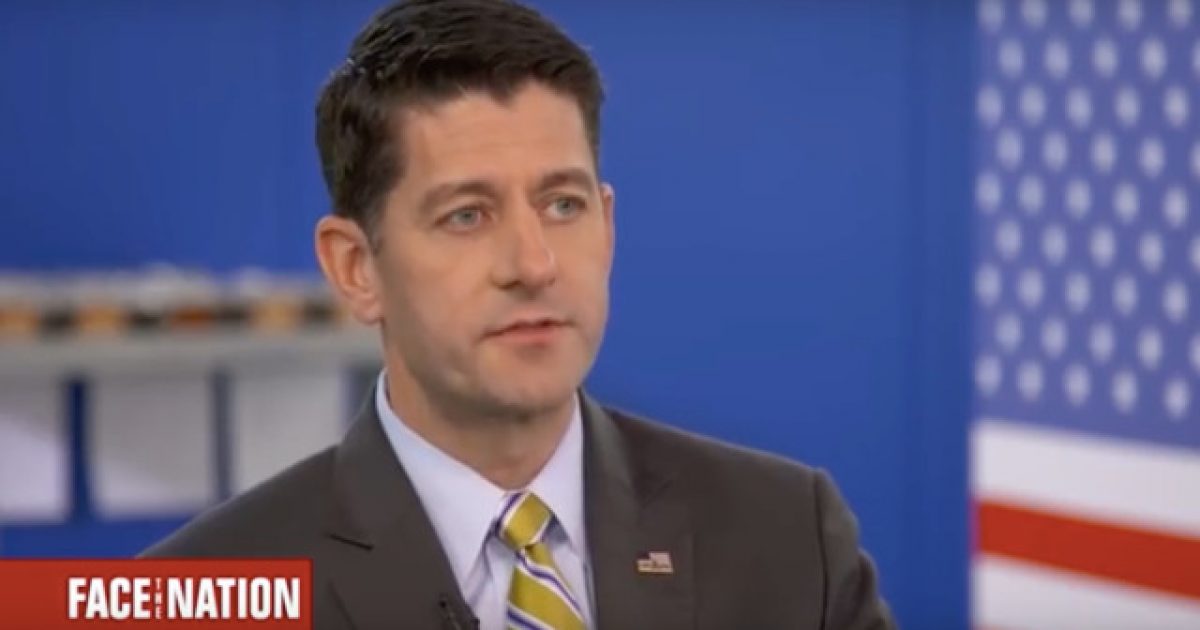 On a recent episode of “Face the Nation,” host John Dickerson played a clip of an interview he conducted earlier this month with Speaker of the House Paul Ryan where he slammed the mainstream media for only seeming to cover the political fighting going on in our nation.

Another topic of conversation that came up during the interview besides the discussion of bipartisanship in the media is how identity politics has infiltrated the GOP.

DICKERSON: Why do you think there’s not much talk about bipartisanship in the coverage?

RYAN: You know, I don’t think it sells for you guys, for the media. You take a look at the bills we pass out of the House – about a thousand bills. It’s been one of the most productive sessions of Congress in a generation. And of those roughly thousand bills, over 80% of them are bipartisan bills. So, we’ve tackled opioids; we’ve tackled human trafficking; we’ve rebuilt the military. All of those are bipartisan, but they don’t get reported. It doesn’t sell. So, I honestly think, John, it’s the hits and the clicks, and it’s the ratings chase that’s on display in America today that says when they’re fighting each other, that’s when you cover it.

DICKERSON: So if we accept some portion of responsibility for that, you’ve seen some of President Trump’s rallies. Do those rallies accentuate the things that unite us – the bipartisan achievements? Or do they do something very successful in politics…which is sow division in the country?

DICKERSON: Do you see that happening at his rallies?

Ryan noted that while sometimes divisive behavior is present at Trump’s rallies, that’s not always the case. When Dickerson pressed Ryan for more, he launched into a bit about the dangers of identity politics:

I worry about tribal identity politics becoming the new norm of how politics is waged. As conservatives, we always thought this was sort of a Left-wing, Alinsky thing. Unfortunately, the Right practices identity politics now as well. It’s the day and age, it’s technology and everything else – identity politics, which is now being practiced on both sides of the aisle, is, unfortunately, working. And I think we, as leaders, we gotta figure out how do we make inclusive, aspirational politics strategically valuable again?

Look…on economic growth, on tax reform, on getting the military, and helping veterans – those are things that he has led us to that have really brought people together. And he talks about these at his rally, and that is inclusive.

Check out the video below for more:

VIDEO: Tucker Carlson Breaks Down Why Democrats Have Flipped on Undocumented Immigration