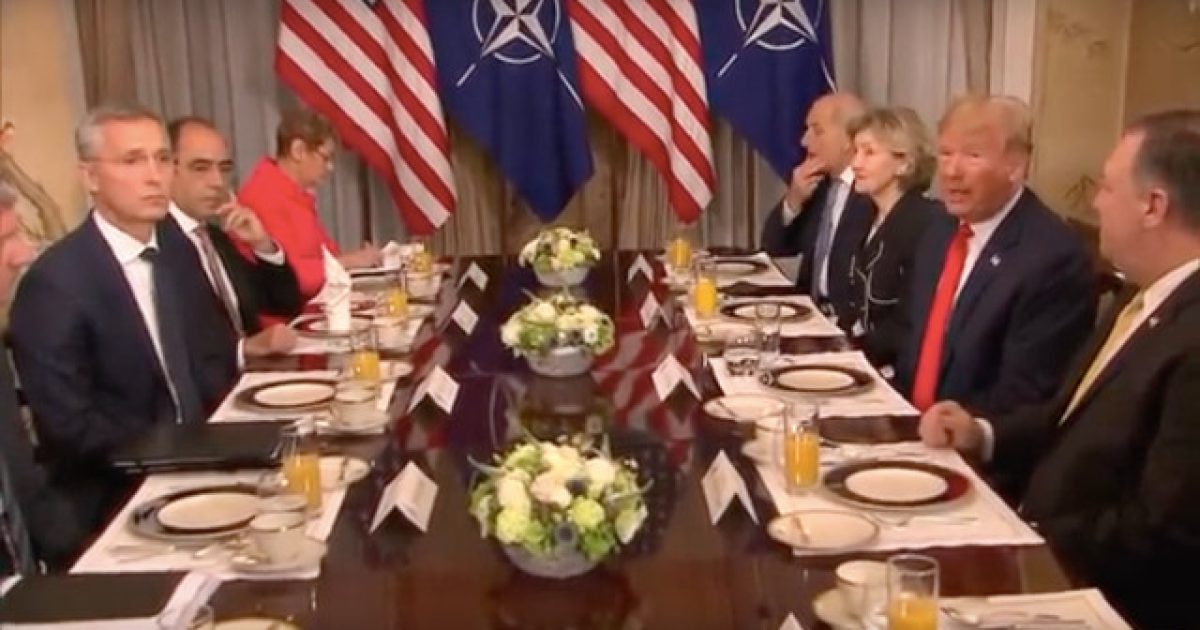 President Trump is not the kind of man to mince words when he’s got something on his mind to say, and he most certainly lived up to that well earned reputation for telling it like it is when he obliterated members of NATO for not giving enough money to the organization.

He didn’t stop there. He also accused Germany of being held captive by Russia.

As you can see, Trump was fired up and ready to go, unafraid to speak his mind which is one reason among many that so many folks admire him.

In a stunning public dressing-down of NATO Secretary-General Jens Stoltenberg, President Trump fired off criticisms of the alliance, reiterating his complaint that it is not paying enough for defense and singling out a German oil-and-gas pipeline deal with Russia.

“Well, I have to say I think it’s very sad when Germany makes a massive oil and gas deal with Russia when you’re supposed to be guarding against Russia,” Trump said.

“So, we’re protecting Germany, we’re protecting France, we’re protecting all of these countries,” Trump continued. “And then numerous of the counties go out and make a pipeline deal with Russia where they’re paying billions of dollars into the coffers of Russia. So, we are supposed to protect you against Russia.”

“You tell me if that is appropriate?” Trump said as he blistered NATO Secretary-General Jens Stoltenberg. “Germany is totally controlled by Russia.”

Ouch. That’s definitely going to leave a mark on the delicate ego of these so-called “world leaders” and influencers, wouldn’t you agree?

Trump is right in saying that previous presidents have not done much to fix this particular situation, which strongly suggests he’s most definitely going to solve the problem if he has the time to do so. This is precisely what he did with the whole North Korea situation too.

Obama and President Bush before him could’ve done more to fix a lot of issues on the geopolitical stage, but out of fear of not pleasing their base, they chose to compromise their values in this particular area of politics.

Thankfully, we have a commander-in-chief in office who is actually taking measures to clean up the mess. We need to stop making them because we may not be so blessed to have someone like Trump come in and fix things in the future.

Air Force Veteran Forced to Sell His Home, The Reason Why Will Make Patriots Everywhere Furious