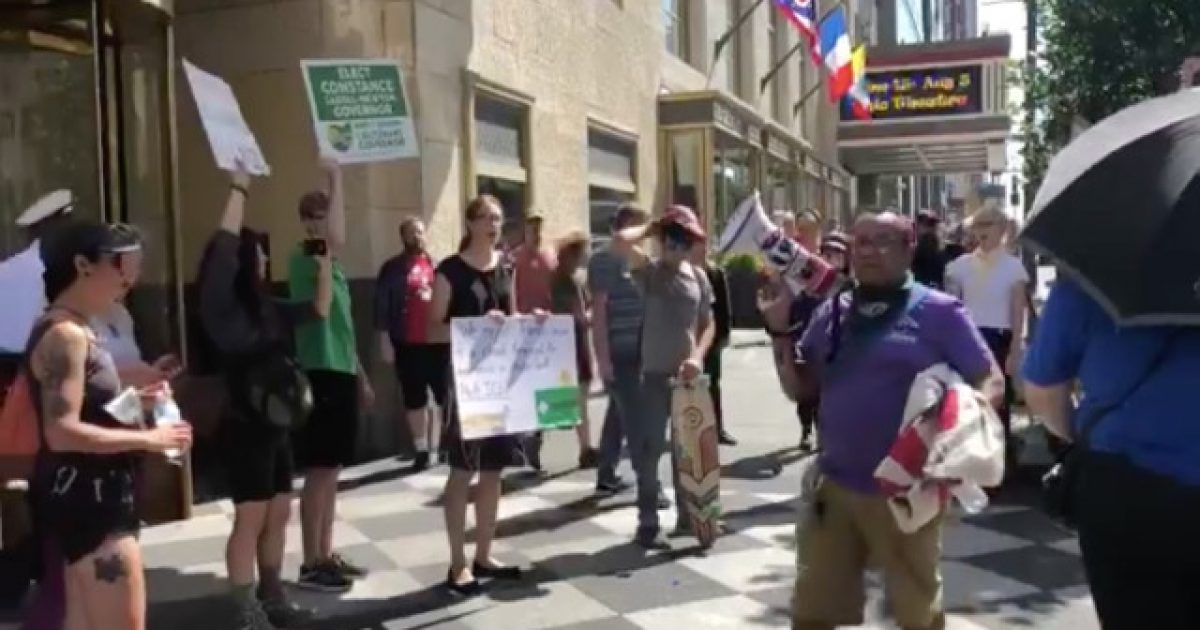 It seems the Democratic Party and leftists in general are on a mission to practically gift wrap the 2018 midterm elections to the GOP, especially now that they are completely losing their minds on the immigration issue and demanding that the government abolish the Immigration Customs and Enforcement agency.

A recent Columbus, Ohio protest calling for such action to be taken took a strange and disturbing turn when activists decided to hoist a woman up on a large wooden contraption and duct tape a man to the base of the object, all the while chanting “F*** the police!” in front of news cameras.

This is pretty insane.

I’m on Front St. at a rally to abolish ICE. A woman is harnessed in a 32-foot-tall tripod with a person duct taped to the base. They say she’s not coming down until action is taken. At least 14 cop cars and fire are present. @DispatchAlerts pic.twitter.com/BfZ4Y7j9ry

The woman has been released from her harness and brought down by Columbus Fire. A man is still duct taped by his hands at the base of the tripod. At least two people have been arrested so far. @DispatchAlerts pic.twitter.com/Z1FaWuuqpW

More people are being arrested. The man taped to the base of the tripod has been removed and is being carried away by his arms and feet by three officers. @DispatchAlerts pic.twitter.com/eCpTI3Vbzv

They are now using chainsaw to break down the logs. Protesters are chanting, “We’re still fighting, take the wood.” pic.twitter.com/3ndcrzhQp2

Protesters have moved in front of LeVeque Tower at the Broad St. entrance. I’m told by organizers that several protesters are in the ICE office, but that floor is currently locked. @DispatchAlerts pic.twitter.com/y6tb9Y0ahZ

Protesters moved to the intersection of High and Broad in front of the Statehouse. Crowd is smaller now. pic.twitter.com/KVfNKVLT9V

I was told by police at least eight people have been arrested for various charges, including disorderly conduct. The 8-10 people in the LeVeque Tower have been removed from the ICE office for trespassing, police said. @DispatchAlerts

Update: police officially report 12 people were arrested today as part of the #AbolishICE rally. 5 were arrested at ICE offices in LeVeque Tower, 5 were arrested outside and 2 received summons for charges of disorderly conduct, trespassing and resisting arrest. @DispatchAlerts

What these “enlightened” individuals fail to understand is that we are a nation of laws and we expect folks who want to come and be part of our country to abide by our laws and respect the boundaries we set at the border.

A nation without borders isn’t really a nation. Borders are essential for our sovereignty as a country and when folks just willy nilly sneak over and disrespect our laws and take advantage of our charity, it encourages others to do the same, leaving our resources depleted.

ICE is just doing their job to enforce the laws that already exist on the books, the very laws designed to keep criminals from coming into America and dealing out significant damage to our communities. They are absolutely necessary at the moment and the vast majority of Americans know this is true.

But if the left wants to continue to deny that, go right ahead. It only ends up making folks vote for GOP candidates and further the conservative movement. We need all the help we can get.

Take a Look at How Liberal Protesters ‘Prepared’ to Protest Trump’s SCOTUS Pick. It’s a Doozy.