*NEW* BREAKING News Out Of WASHINGTON D.C.- They Arrested ANOTHER ONE
America's Freedom Fighters 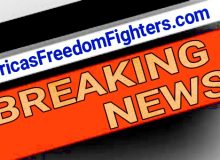 A lone surfer enjoying the Pacific Ocean in Malibu, California, was arrested on suspicion of violating Governor Gavin Newsom’s stay-at-home order. No one else was in sight as he was led away by police.

Another man was arrested for violating Ohio Governor Mike DeWine’s stay-at-home order when all he did was post a video online of a large gathering in Cincinnati.

Churchgoers who attended a drive-in service at a church in Greenville, Mississippi, were fined $500 for reportedly violating a curfew order from Mayor Errick Simmons. “They park in their parking spaces, they keep their windows up, the doors closed, they never get out of the cars like the CDC recommends they do,” a church spokesman said.

So what is it about? Could it be about government control over the individual?

Peaceful protests have occurred around the nation over what many regard as arbitrary and excessive government repression. Have states exceeded their constitutional authority under the guise of dealing with the coronavirus? The issue of curbing individual rights is as old as the republic.

The protection of those rights is guaranteed in the US Constitution. But in the 1905 case of Jacobson v. Massachusetts, the US Supreme Court ruled that a state may place restrictions on individual rights to protect the public from disease and military invasion. The decision was not one-sided. The court added that such power should not “lead to injustice, oppression, or absurd consequence,” and should not apply if the state targets specific individuals or populations with unnecessary restrictions. Jacobson v. Massachusetts has been cited in support of both police power and its limitations.

The courts, however, have not been clear on where we should draw the line.

Enter COVID-19 and the hysteria resulting from the outbreak. Where would you draw the line? Would you accept arrest for walking on the beach? Should all citizens be subject to the same restrictions, regardless of location, age, or susceptibility to the virus? Is it reasonable to demand that we stay at home while allowing the supermarket to be open? How long can closure of private businesses be considered reasonable? How is it determined if a business is critical or non-critical and who chooses the criteria?

“Now that states are moving to indefinite lockdowns without presenting any evidence that this is needed, over and above the severe distancing, it’s past time for us to ask questions,” says attorney Daniel Horowitz. “Placing Americans indefinitely under house arrest without any due process, transparency, time limit, guidelines, or checks and balances on a single executive is something that should shake us to our core.”

Attorney General William Barr has warned against the imposition of rules for dealing with the coronavirus that infringe on constitutional rights. He suggested that stay-at-home orders and directives shutting down businesses are justified up to a point, but “the Constitution is not suspended in times of crisis.”

The stay-at-home orders are like “chemotherapy” for the virus, Barr said, but we are “getting to the point where we’re killing the patient.”

Clearly Barr is disturbed by recent state edicts. “These are unprecedented burdens on civil liberties right now,” he said. “You know, the idea that you have to stay in your house is disturbingly close to house arrest. I’m not saying it wasn’t justified. I’m not saying in some places it might still be justified. But it’s very onerous, as is shutting down your livelihood.”

The consequence of extended lockdown orders is massive economic disruption that can take years to correct. Millions have lost their jobs, businesses have been permanently destroyed, and stocks have tanked. We simply can’t afford to shut down the country every time we experience a viral epidemic.

The economic impact on Americans must be weighed against the seriousness of COVID-19. If we knew for certain that lockdowns prevent the spread of the virus, the orders might be justifiable. So far, we don’t have enough information to reach that conclusion.

Estimates of the number of deaths from coronavirus began in the stratosphere but gradually have been adjusted downward. The latest numbers suggest that COVID-19 is less lethal than annual flu epidemics.

We didn’t shut the country down for them, so why should we do it for the coronavirus?

Applying the same restrictions to North Dakota as we do to New York, which has sustained the lion’s share of the infections, is unwise. Large segments of the population are “at massively lower risk,” said David Katz, MD, specialist in preventive medicine and public health. “A one-size-fits-all interdiction strategy—essentially, let’s keep everybody away from everybody, shut everything down—has potential to hurt more people than it helps.”

Dr. Phil McGraw, host of the Dr. Phil Show, argued that the quarantine is doing more harm than good because of the health risks of isolation, depression, and anxiety. “There’s a point at which people start having enough problems in lockdown that it will actually create more destruction and actually more death across time than the actual virus will itself,” McGraw said.

A frequent criticism of arbitrary state orders is that they are used by the Democratic Party to promote big government. “The only reason America is still in shutdown mode is political,” Cheryl K. Chumley writes in The Washington Post. “Either politicians are too afraid to make any move that might come back to bite them politically or politicians are using this coronavirus to political advantage.”

Comparing government’s response to the virus with the East German Stasi secret police, political commentator Dennis Prager says, “The ease with which police state tactics have been employed and the equal ease with which most Americans have accepted them have been breathtaking.”

Once the precedent has been set, it will be difficult if not impossible to restrain government overreach in the future.

Governors, mayors, and local health officers have responded with totalitarian gestures that suggest contempt for the average citizen. “The response of some mayors and governors to the coronavirus pandemic in recent days has made it clear they think they have unlimited and arbitrary power over their fellow citizens,” wrote John Daniel Davidson in The Federalist, “that they can order them to do or not do just about anything under the guise of protecting public health.”

When peaceful protestors came to the state capitol, Michigan Governor Gretchen Whitmer threatened to punish them with an extension of her extreme social distancing guidelines.

Chicago Mayor Lori Lightfoot threatened citizens that, “We will shut you down, we will cite you, and if we need to, we will arrest you and we will take you to jail.”

A reporter asked Illinois Governor Jay Pritzker about his wife leaving the state for their Florida mansion during his extended lockdown order. “I’m not going to answer that question,” replied the governor in true Stalinist fashion. “It’s inappropriate and I find it reprehensible.”

So Governor Pritzker, how about paying my bills while you force me to stay home from work? How about bolstering small businesses when their very existence is threatened? How about remembering that if the state is going to ignore individual rights, it must do so with great trepidation?

Where do we draw the line?

With much more care and responsibility than we are witnessing today. When violent criminals are released from jail but you and I get fined $1,000 for not wearing a mask, the country has a lot of unfinished business.