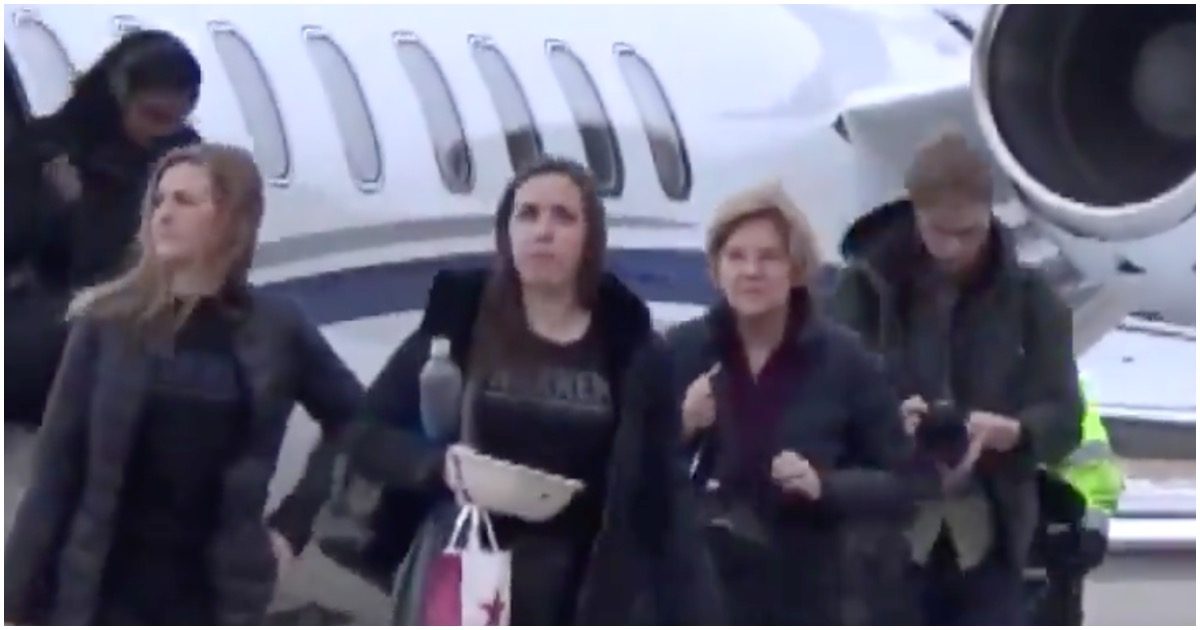 Hypocrisy is a powerful word. Democrats are often guilty of it, saying one thing and doing another. A great example is when a 2020 Democrat presidential candidate demands that Americans reduce their carbon footprint but have no problem flying privately from location to location.

On Tuesday, Elizabeth Warren appeared completely embarrassed when she was caught on camera exiting a private jet. For some reason, the Massachusetts senator thought she was invisible and decided to hide behind a staffer.

It was quite a sight.

Democrat presidential candidate Senator Elizabeth Warren was caught flying a private plane to Iowa on Monday and, when she realized that she was being recorded, ran and hid behind a staffer.

The best part of this video is that after Elizabeth Warren realizes she's been caught on camera exiting a private jet.

She attempts to hide behind her staffer. As if that would work. 🤣🤣🤣 pic.twitter.com/WVtCOaVphK

“There’s a camera to your right, No don’t look at the camera!”

It's funny that she ducked. If she were asked about private jetting and answered "It's just not possible to campaign in a national contest flying commercial" I would respect that answer

She can run but she can’t hide.

It sure appears that way, the lady isn't known for shying away from cameras now is she?

The difference is that Warren hasn’t yet been called on her BS by the mainstream media. Until that happens, she will continue to make herself look like a punk.

On Tuesday, Senator Elizabeth Warren (D-MA) , growing more and more desperate as she slides down the polls in the Democratic presidential race, offered a plan that was bludgeoned by Senator Ted Cruz (R-TX) once he got wind of it. Warren suggested that on the first day in office after she were elected president, she would cancel student loan debt for up to 42 million Americans and simply ignore what Congress had to say about it.

As The Washington Examiner reported, “The Democratic presidential candidate said, in a plan released Tuesday, that she would direct her secretary of education to “compromise and modify” federal student loans consistent with her plan to cancel up to $50,000 in debt for 95% of student loan borrowers.”