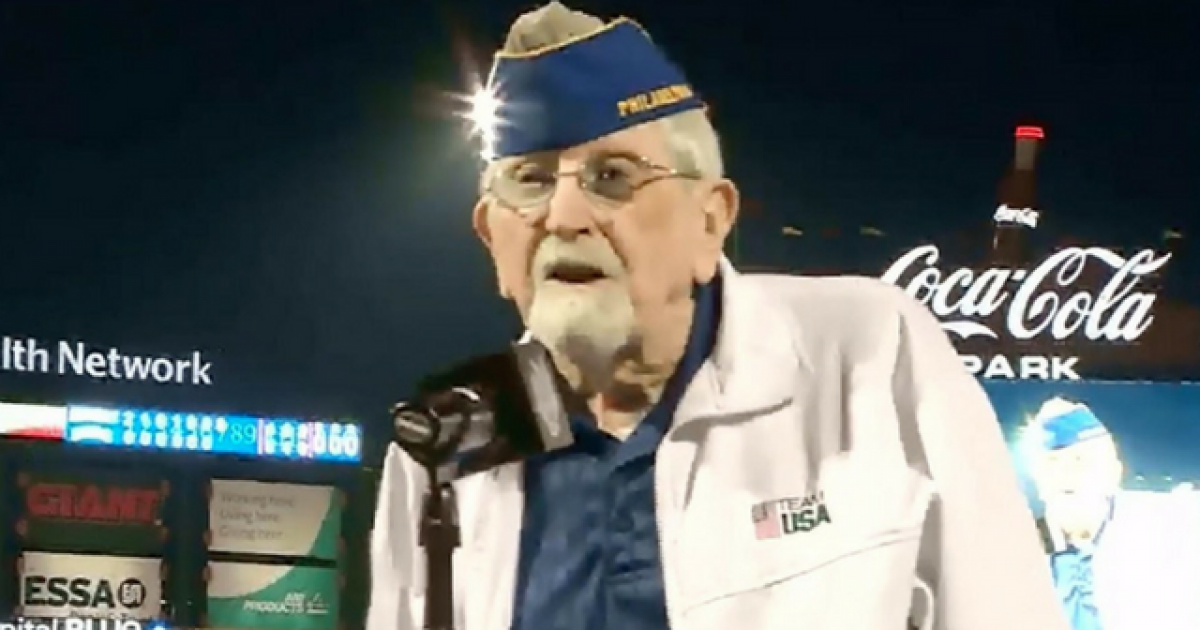 It’s a week after Memorial Day and just over a month before the 4th of July, and patriotism is in the air. But it takes on a new meaning in a time when our national anthem has become the center of controversy and anti-Americanism runs rampant on the ideological left.

Many Americans voted for Trump because he made one simple promise, to “make America great again,” but, despite all his flaws as a President and a man, his election has reminded many Americans just how great it is.

“Raymond T. Mohr, who served as a radio operator with the Army’s 29th Infantry Division and landed on Omaha Beach the day after D-Day, received a standing ovation from the Lehigh Valley IronPigs’ crowd after the touching performance,” they say.

His performance was part of the Philadelphia IronPigs’s Military Appreciation Day at their Tuesday game against the Charlotte Nights at Coca-Cola Park in Allentown.

A player for the IronPigs, Nick Rickles, also tweeted out a picture of himself shaking Mohr’s hand and thanking him for his service.

“God Bless America,” Western Journal explains, was first written by playwright and WWI veteran Irving Berlin, who wrote it for a musical and then decided it wasn’t right for it.

It was resurrected later as the makings of WWII began to appear on the global scene, and it was in this era that it became an iconic hymn to our great nation.

“The opening lyrics, which are not often song, were particularly poignant at the time with the storm clouds of war rising in Europe as Germany seized Austria in the spring of 1938. Additionally, Japan was on the march in Asia, entering into a full-scale war with China in 1937,” WJ explains.

“While the storm clouds gather far across the sea, let us swear allegiance to a land that’s free,” the song begins. “Let us all be grateful for a land so fair, as we raise our voices in a solemn prayer.”

As ever true today as it was back then. God bless America.