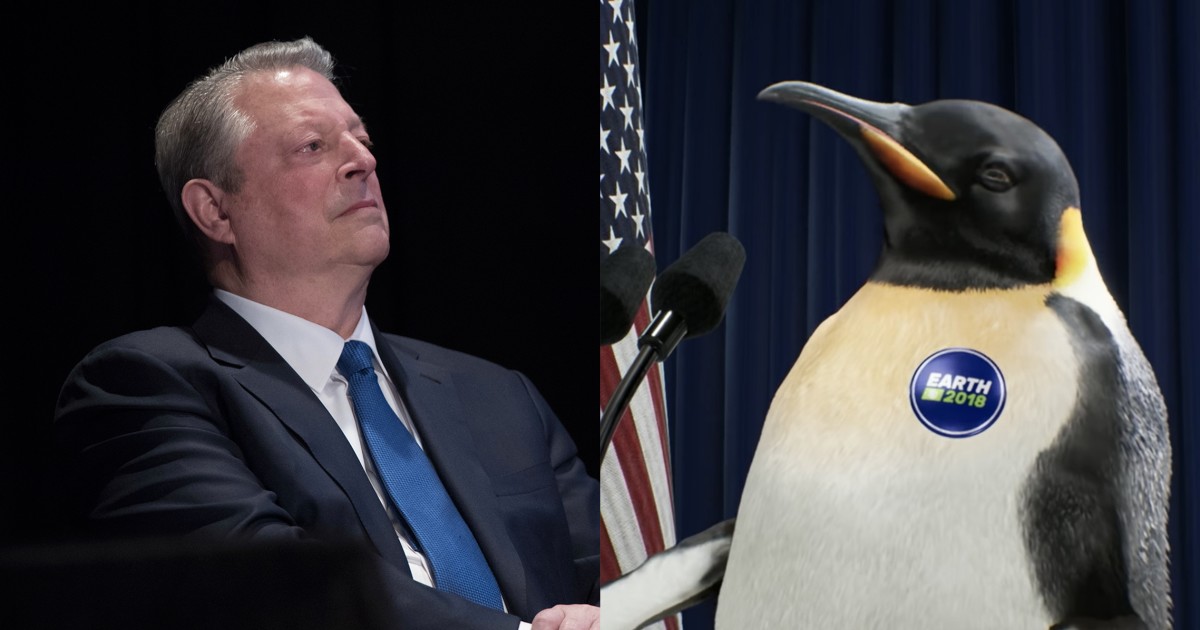 Al Gore, who once served as the Vice President of the United States and now spends his days wandering the countryside warning of an impending “nature walk through the Book of Revelation” that never seems to happen, has announced his endorsement for the upcoming November midterms.

“I just wanted to take a minute to help spread the word about a certain young candidate running for Congress,” he says in a video posted to his Twitter page. “She’s smart, tenacious, and she’s running to create a healthier world for us all. …

“She’s passionate about this planet, and any candidate with that priority has my complete support. That’s why today I’m proud to officially endorse Earth for Congress.”

It must be noted this is all delivered incredibly awkwardly, leaving many viewers utterly confused as to what on earth this is all about.

She’s a penguin of the people and she’s got my vote. Consider this my official endorsement of Congressional candidate @EarthForAmerica. Check out her platform at https://t.co/7jNRdRYKGS and make sure to vote on Nov 6! #StandWithEarth pic.twitter.com/PqzdIcZYb2

Turns out, it’s all an effort to reach young voters.

“We launched Earth for America to get young people talking about issues that will define their future,” says Stacie Paxton Cobos, of the Gore-backed Climate Reality Project, speaking to the Washington Examiner.

“It meets young people where they are, through the tools they use to communicate and the humor that resonates with them,” she continued.

Would it have hurt him to add a little emotion to his voice?

Conservative Tribune explains that, if Gore is the man to endorse “climate reality”, he doesn’t seem to have much of a grasp on it himself:

Speaking of “climate reality,” here is an inconvenient fact: Nearly all of the alarmist, sky-is-falling predictions made by Gore and others like him regarding climate change have failed to come true.

“One of the first glaring claims Gore makes is about Mount Kilimanjaro in Africa. He claims Africa’s tallest peak will be snow-free ‘within the decade,’” Michael Bastasch noted in The Daily Caller two years ago.

Remember, that snow-free claim was made by Gore in 2006. Those 10 years have come and gone.

“Well, it’s been a decade and, yes, there’s still snow on Kilimanjaro year-round. It doesn’t take a scientist to figure this out,” Bastasch wrote.

That prediction fell flat on its face, just like Gore’s presidential campaign.

“Global temperatures showed little to no warming trend after Gore released his film,” Bastasch wrote. “In fact, surface temperature data showed no significant global warming for a period of about 15 years, starting in the early 2000s.”

Countless other Gore predictions have proved to be completely, incredibly wrong.

I guess they’re not setting their sights on people too young to remember Gore’s original predictions.

Vulgar Anti-Kavanaugh Sign on Middle School Thought to be a Fake. Turns Out it’s Not.