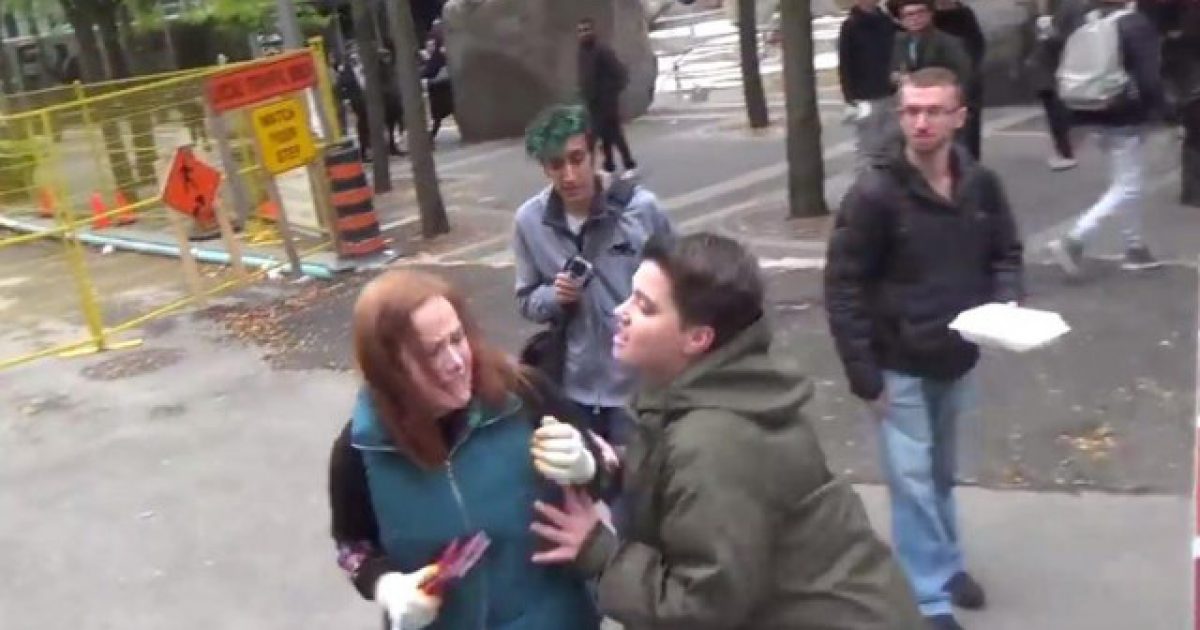 Another female pro-life activist in Toronto has been physically assaulted by a pro-abortion supporter, and once again, the incident was captured on video.

The attack occurred near Ryerson University on the first of October, which is the day after the now infamous “roundhouse kick” incident we’ve all become familiar with over the last couple of weeks.

As a result of the latter incident, Jordan Hunt, 26, now faces eight counts of assault and seven counts of mischief under $5,000.

As for the most recent incident, video shows an individual wearing a dark green jacket grabbing and knocking down a stack of pro-life signs then throwing a dolly that had been used to hold them upright.

The attacker then shoved pro-life activist Katie Somers, Global News said, before apparently reaching into Somers’ backpack, pulling out an object, and smashing it on the ground.

The shoving continued, with the attacker doing a threatening “chest pound” as a crying Somers tried to get away. “C’mon, let’s do it!” the attacker was heard saying.

No one appeared to make any meaningful attempt to intervene, but a presumably pro-abortion woman could be heard on video mocking Somers: “Oh, are you crying little girl? Did we hurt your feelings? I think we hurt her feelings.”

The attacker is alleged to be Gabriela Skwarko, an assistant at Ryerson’s Social Innovation Office and a member of the Ryerson Reproductive Justice Collective, which is a pro-abortion group.

The group declined to give an on-camera interview and claimed that they have been assaulted multiple times by the pro-life group, though, as of this writing, no evidence of such abuse has been uncovered.

At the end of the day, no matter how you cut it, physical violence is absolutely wrong. There’s no need for such action to be taken, no matter how passionate the debate over an issue might become.

We as human beings have to learn to respect one another again and find ways to connect with each other, to find that common ground we all share.

Let’s hope that happens sooner rather than later.

Protester Asks GOP Senator to Apologize to Her Children. The Response She Gets Makes Her Angry.