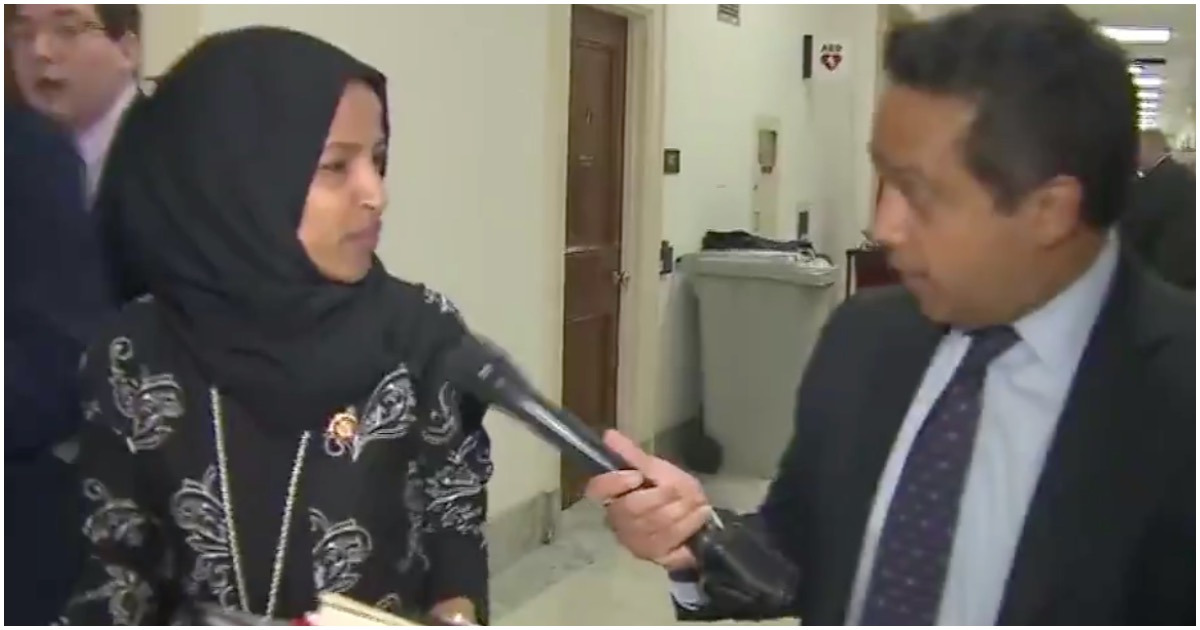 “What’s wrong with you?”

Instead, Ilhan lashed out before storming off.

Rep. Ilhan Omar: "Are you serious? What is wrong with you?"

CNN reporter Manu Raju: "I'm asking a question about your tweet — you had a tweet saying the president trafficked in hate."

Omar: "Yes I tweeted, and there's a response. You can run that." https://t.co/8esRl3KRMg pic.twitter.com/IwWhHsoZME

You have trafficked in hate your whole life—against Jews, Muslims, Indigenous, immigrants, black people and more. I learned from people impacted by my words. When will you? https://t.co/EqqTyjkiNE

Raju tweeted after the interview:

Rep. Ilhan Omar in no mood to talk about her controversies this week. First, she said: “No thank you” when asked to comment on Trump saying she should resign. Second time I saw her, she yelled: “Are you serious?” when I tried to question her.

Rep. Ilhan Omar in no mood to talk about her controversies this week. First, she said: “No thank you” when asked to comment on Trump saying she should resign. Second time I saw her, she yelled: “Are you serious?” when I tried to question her.

Asked about her tweet this AM attacking Trump for trafficking in hate, she angrily said: “Yes I tweeted, and there’s a response. You can run that. Have a nice day.” And she walked into a meeting

Asked about her tweet this AM attacking Trump for trafficking in hate, she angrily said: “Yes I tweeted, and there’s a response. You can run that. Have a nice day.” And she walked into a meeting

Before I even got my question out the second time I saw her, Ilhan Omar angrily said: “Are you serious? What’s wrong with you.”

Before I even got my question out the second time I saw her, Ilhan Omar angrily said: “Are you serious? What’s wrong with you.” https://t.co/uhQ2stdrsF

“[Omar’s] tweets were a disgrace & her apology was inadequate. Anti-Semitism has no place in the United States Congress, much less the Foreign Affairs Committee,” Pence wrote, days after Omar tweeted “it’s all about the Benjamins” while commenting on AIPAC’s political influence. “Those who engage in anti-Semitic tropes should not just be denounced, they should face consequences for their words.”

Senate Minoirty Leader Chuck Schumer, who is Jewish, got in on the fun, as well…

Omar shows no shame after responding to a series of tweets from journalist Glenn Greenwald.