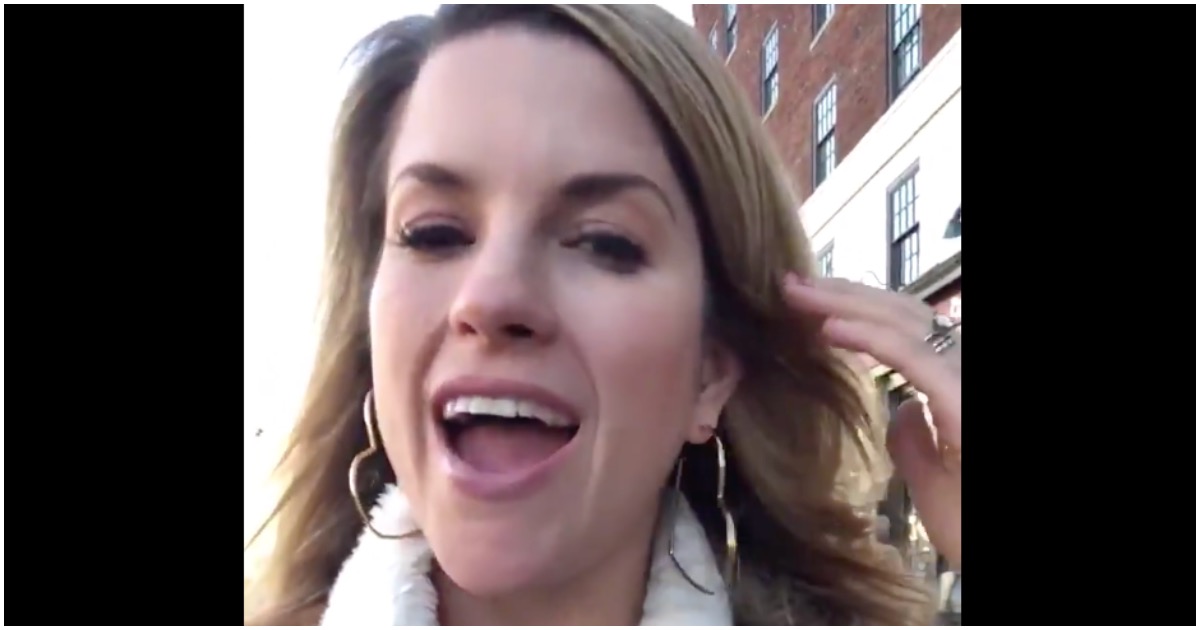 It’s dangerous being a Trump supporter.

You never know when you’ll be standing somewhere in Washington DC when a random person decides to smack you upside the head for your political views.

That’s what happened to this gorgeous blonde woman outside a hearing for General Michael Flynn.

I feel in my heart today was a good day for Flynn…just left the sentencing.

Ignore the interruption in the middle of this video, a woman came up and slapped me and my phone flew to the ground. #clearflynnnow #assulat #whatthehell pic.twitter.com/F4QkVZArXL

About the lady that hit me today… https://t.co/BGnejrBX9h

The bottom line here is that violence is acceptable to the left.

If it wasn’t, the mainstream media and Congressional Democrats would call for an end to this kind of nonsense – and actually mean it.

If the Defense Intelligence Agency can clear General Michael Flynn with a single document, why not release it?

What’s up with that?

John Solomon: “Let me say this about Mike Flynn. In May 2017 there was a document identified to a small number of people in the United State government. It’s in the possession of the Defense Intelligence Agency. For 18 months there’s been an effort to resist declassifying that document. I know that that document contains extraordinary exculpatory information about General Flynn. I don’t believe the president has ever been told about this document. One lawmaker discovered it but he was thwarted by the Defense Intelligence Agency in his ability to disclose it. I think we all should ask for that declassification! Get that out. It may enlighten the judge!”

Special Counsel Robert Mueller has been ordered to hand over documents.

In a new twist, a U.S. District Court judge has ordered special counsel Robert Mueller to hand over all secret documents related to the questioning of former National Security Adviser Michael Flynn.

Flynn’s legal team claims the Federal Bureau of Investigation urged the retired United States Army lieutenant general not to bring a lawyer to an interview with agents at the White House in January 2017. Flynn has since pleaded guilty to one count of lying to prosecutors and is scheduled to be sentenced on Tuesday.

According to Bolton, Russian President Vladimir Putin will visit the White House sometime in 2019.

If you’re going to ask President Trump a silly question, you better be prepared to duck and cover.

For example, don’t ask 45 about impeachment.

President Trump said during an interview with Reuters on Tuesday that he’s not concerned about being impeached, adding he thinks “the people would revolt if that happened.”

“It’s hard to impeach somebody who hasn’t done anything wrong and who’s created the greatest economy in the history of our country.”

“I’m not concerned, no. I think that the people would revolt if that happened.”

Trump for the win?

Trump recently went after Democrat Senator Dick Blumenthal (CT) harder than he’s gone after anybody in, well, for Trump, a long while.

It has to do with Dick’s “service” in Vietnam.

Service is in quotes for a reason.

Watched Da Nang Dick Blumenthal on television spewing facts almost as accurate as his bravery in Vietnam (which he never saw). As the bullets whizzed by Da Nang Dicks head, as he was saving soldiers….

….left and right, he then woke up from his dream screaming that HE LIED. Next time I go to Vietnam I will ask “the Dick” to travel with me!

Here’s why Trump is upset with Blumenthal:

SDNY Cohen sentencing memorandum is a bombshell. The President of the United States is again named as an unindicted co-conspirator. Prosecutors in the SDNY, independent of the Special Counsel, believe Trump participated in a felony that played a substantial role in his election. https://t.co/JtjwKmwzcf

As the walls close in on Trump, risk is high that he will become more desperate & destructive & potentially more damaging. I will demand AG nominee William Barr commit to unequivocally protecting the integrity & independence of the Special Counsel.

After not 1, not 2, but 3 court filings tonight, we have more evidence that Trump is implicated in criminal wrongdoing. It is a basic, fundamental tenant of the American justice system: no one is above the law.

Blumenthal should be happy. After all, Trump just made him famous.

There are probably plenty of people in Dick’s state who didn’t know he was their senator.