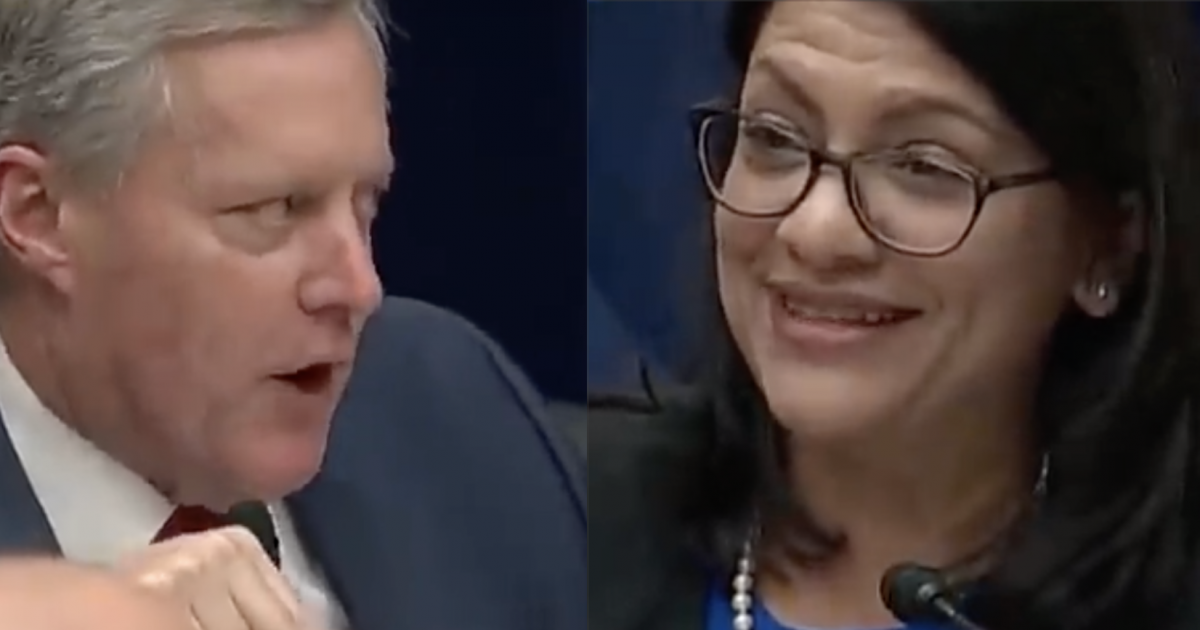 North Carolina Congressman Mark Meadows noted that he has “nieces and nephews who are people of color.”

Of course, his words came after freshman Democrat Rep Rashida Tlaib (MI) implied that Meadows was racist for bringing a black woman to speak fondly of President Trump to Michael Cohen’s hearing.

Meadows was royally ticked off, as you might imagine.

The black woman to whom Tlaib is referring is Lynne Patton, a senior official at Housing and Urban Development who works under Ben Carson.

Scooplet: Longtime Trump aide Lynne Patton (who now serves as a HUD official) is attending hearing as a guest of Rep. Mark Meadows. Sources say Patton will sit behind Meadows during hearing. Patton, who is black, may do press to push back against testimony that Trump is racist

2. Have talked to several members and they've never seen an admin official sit behind a member of congress during a hearing! As @maggieNYT pointed out, Patton was brought into Trump world by Cohen. This is clearly intended as a reminder for Cohen, Meadows is Trump's top ally.

3. Patton is now sitting behind Meadows as was planned. pic.twitter.com/Bqhqv6BxQ6

I am honored to be the special guest of @RepMarkMeadows today. I am here in support of @POTUS and in support of the truth, as Michael Cohen (knows that I know) it to be. And the truth is that it doesn’t take you 15 years to call someone a racist. Unless they’re not one. pic.twitter.com/jPxeYTbTYT

More on the Cohen hearing, per Fox News:

Former Trump lawyer Michael Cohen exploded Wednesday when House Oversight and Reform Committee Ranking Member Jim Jordan, R-Ohio, accused him of having “non-existent” remorse over charges of bank fraud, to which he had pleaded guilty.

“Shame on you Mr. Jordan, that’s not what I said,” he said to Jordan.

The exchange came after Cohen, who was testifying on Capitol Hill, was grilled by Rep. James Comer, R-Ky., about the charges of bank fraud that were part of the financial crimes to which he pled guilty in August.

To say Louis Farrakhan is an anti-Semite would be an understatement.

And yet, that never stopped Barack Obama, Maxine Waters or other Democrats from meeting with the leader of the Nation of Islam.

It has now been learned that Democrat Congresswoman Rashida Tlaib wrote an article for a wildly anti-Semitic publication linked to Farrakhan.

Tlaib argues in the op-ed, which is dated October 4, 2006 and was resurfaced by Bier, that illegal immigrants shouldn’t face criminal charges or be deported for violating immigration law.

Since the time of Tlaib’s writing, Final Call has published numerous articles espousing anti-Semitic conspiracies with headlines such as “Racist Rabbis: A Long History of Jewish Race-Haters,” “The Secret Relationship Between Rappers and Jews,” and “Solving The Mystery of Jewish Financial Success,” among others. Tlaib has not published in the outlet since her initial 2006 column.

After her victory in November, Tlaib celebrated with the Palestinian flag.