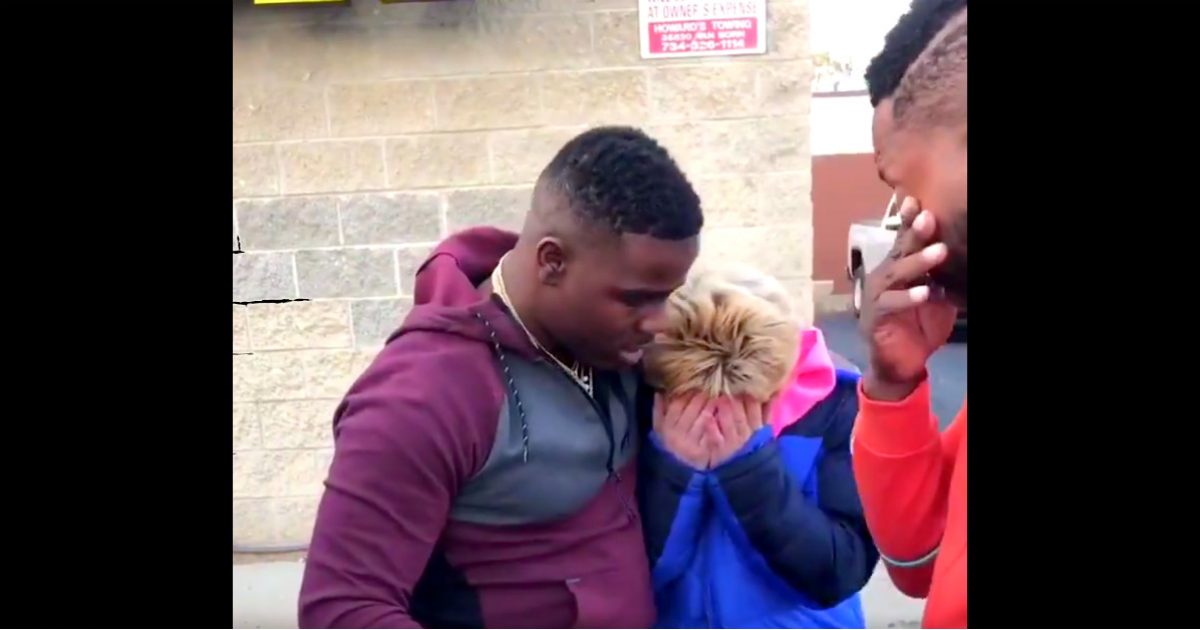 Now I don’t know about you, but I’m a firm believer that if you look around with open eyes, you can find someone to bless, even in a small way, every single day. In stark contrast to the “hateful bigoted Christian” caricature many seem to believe in, Jesus said everyone will know we are his disciples by our love for one another.

A gas station became an ordinary setting for an extraordinary act of kindness when a group of young men encountered a woman doing something a little unusual.

Carlos “HaHa” Davis is a young comedian, and on an ordinary day back in October, he and his friends stopped to fill up their gas tank while on tour.

Davis noticed a woman at the pump counting pennies to pay for her gas and looking very downhearted. Before she could finish, Davis and his friends quickly came up with a plan.

This week on “I love you” saw a ladies put pennies in her gas stank. I love you pic.twitter.com/Sikekr10cf

Hopping back into his van, Davis and his friends pooled together hundreds of dollars in cash they’d earned from stand-up gigs.

Calling the woman over to the van, Davis and his friends offered her the handful of money, not knowing that they were ultimately giving her something bigger than money. They gave her hope.

When the young men handed the woman the cash, her expression instantly went from confusion to tearful joy.

“My husband just died a week ago,” she told them. “We weren’t like this before. I didn’t ask nobody for nothing. I didn’t… I didn’t even ask you…”

“You okay,” Davis reassured her. “We got love for you. This is for you.”

“We gotta take care of each other,” his friend added.

The woman asked Davis how they knew she was in trouble, to which he simply replied, “[My friend] told me you were paying for your gas with pennies so I had to show love — it’s only right. We gotta stick together.”

God certainly was looking out for this woman, and she knew it. “I guess He does look down…” she told the men as she happily cried over their gift. “He says He’s watching you and watching you –“

We may not all be able to around with an extra few hundred dollars to pass into the hands of everyone we meet, but God clearly works behind the scenes in the great things and the small things in our lives. There’s no telling where or when He’ll call on you to be a part of His plan to share His truth or be a blessing, so keep your eyes open!

A feat unmatched for Chestnut, who is growing accustomed to the glory.

One of the 4th of July’s most time-honored traditions may also be one of its zaniest, and this year was no exception. Every Independence Day, the Nathan’s Famous Hot Dog Eating Contest amazes spectators and onlookers alike, as the larger-than-life characters of the professional eating world take the stage for what is widely considered the ultimate test of their “sport”. And no, this isn’t the rinky-dink affair that you might find at your local frankfurter spot.  The pageantry and fanfare are unparalleled, as evidenced by the introduction afforded to the world’s most prolific hot dog downer. https://twitter.com/espn/status/1411730424913616907?s=20 And, if you thought for one second that Chestnut was going to phone it in in 2021, you’d be dead wrong. Chowdown champ Joey “Jaws” Chestnut broke his own record to gulp to a 14th win in the men’s Nathan’s Famous Hot Dog Eating Contest on Sunday, while Michelle Lesco took the women’s title. Chestnut downed 76 franks and buns in 10 minutes. That’s one more than he did in setting the men’s record last year, when the contest unfolded without fans because of the coronavirus pandemic. “It just felt good,” Chestnut, of Westfield, Indiana, said in an ESPN interview after his win Sunday. “Even if I was uncomfortable, having everybody cheer me and push me, it made me feel good.” Lesco, of Tucson, Arizona, downed 30¾ dogs in 10 minutes and called her win “an amazing feeling.” Reigning women’s champ and record-holder Miki Sudo skipped this year because she’s expecting a baby in a few weeks with fellow competitive eater Nick Wehry. https://twitter.com/woodwardsports/status/1412118527214034945?s=20