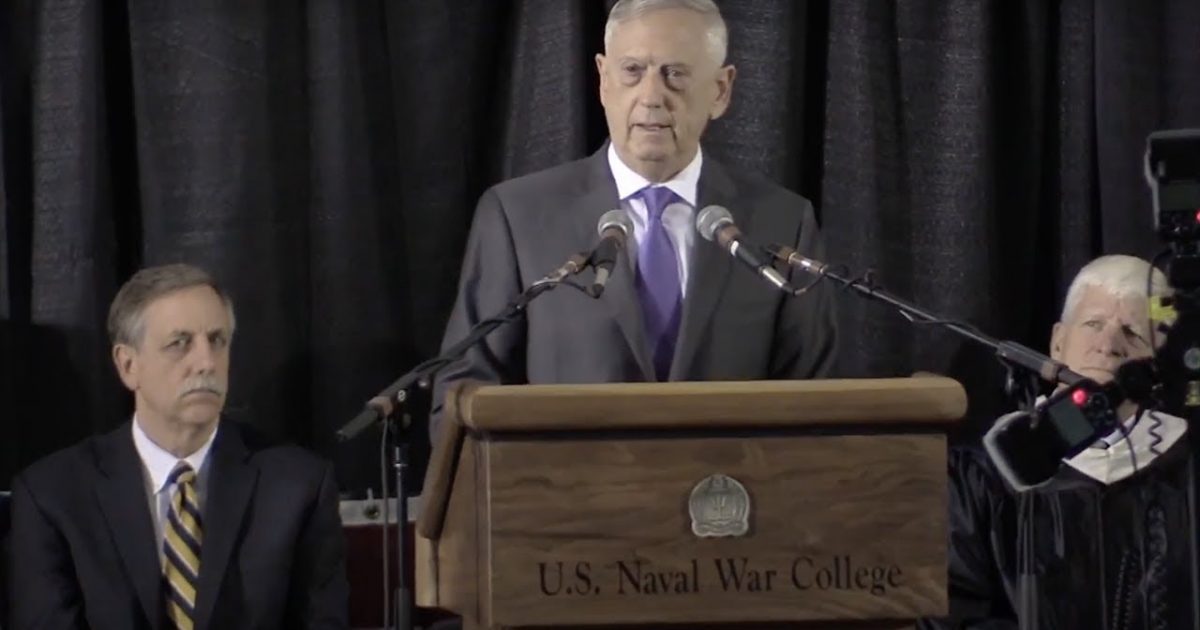 Defense Secretary Jim Mattis is quite a character, a man’s man who not only is tough as nails, but also oozes charm, wit, and class. He’s the kind of grandfather every young boys wants to have, but so mythical in his standing in the military that he seems nigh to untouchable.

Mattis recently gave a speech to Naval War College graduates where he seemed to be suffering some difficulties with his voice. Instead of allowing this situation to turn awkward, Mattis handled himself not only with poise, but he used it as an opportunity to showcase that charm we just talked about and get a few chuckles in the process.

But as he navigated his way through the early portion of his speech, Mattis became noticeably bothered by a scratchy throat.

“That’s what you get when you testify too often in front of Congress, by the way,” he joked.

Clearing his throat every few seconds, Mattis pressed on.

“In the words of Adm. Chester Nimitz…nothing he encountered in the Pacific during the war was either strange or unexpected, for this campus had prepared him well.

“I’m very confident — thank you very much,” he said, halting his speech after an official brought him a bottle of water to remedy the nagging windpipe.

Taking a swig from the bottle, Mattis looked out at the audience and said, straight-faced, “If this was vodka, it’d be a lot better speech,” prompting laughter and applause throughout the crowd. “But I’m not supposed to glamorize alcohol anymore,” he added. “So you young folks, you ignore what I just said.”

“Don’t shy away from the hard problems and even tougher solutions by saying that something is above your paygrade,” he said. “Your nation and services did not invest a precious year of the finest education possible for you to take a timid view of your leadership responsibility.

“Keep your wits about you, keep your grace under fire, your civility with subordinates — inspiring those you lead with humility and intellectual rigor.”

This guy is simply awesome, isn’t he? President Trump chose very wisely when making Mattis our defense secretary, as he not only has the skill, tactical intelligence, and know-how to keep our nation safe, he’s also feared by our enemies who know that if Mattis is on the job, their days are numbered.

Hopefully the young people in attendance during his speech will take his wise words to heart and apply them to their careers in the military and their lives outside of the uniform as well.