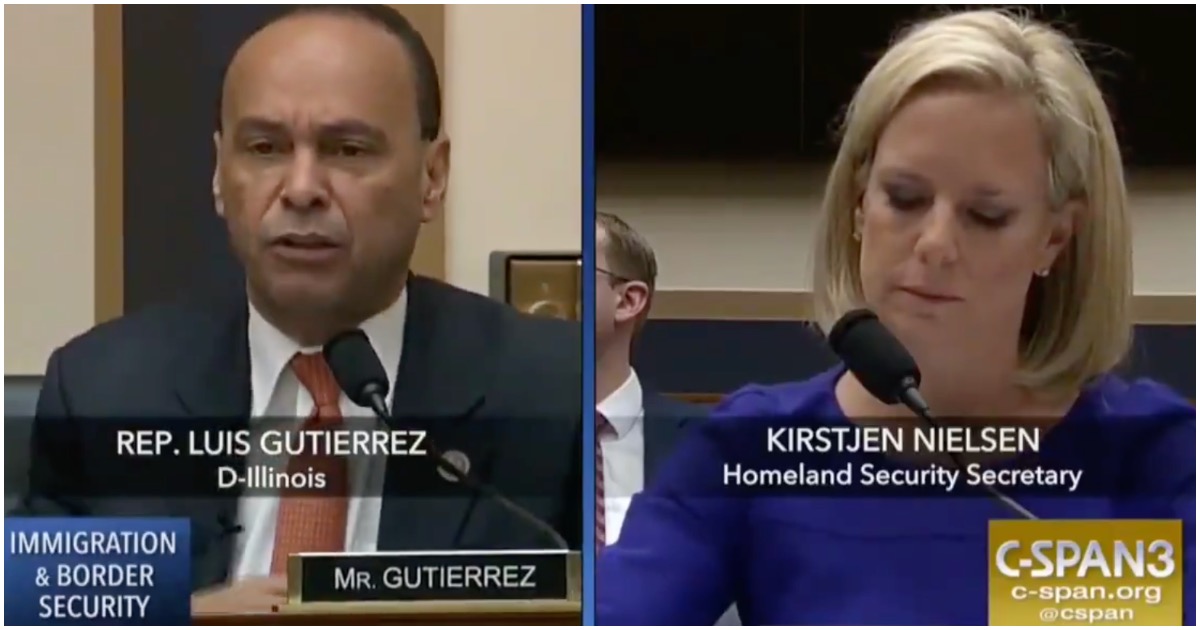 How Democrats can claim to be Christian while supporting abortion is as baffling as it gets, but that’s an issue that will never be solved.

Check out Illinois Democrat Rep. Luis Gutierrez who storms out of a hearing with DHS Chief Kirstjen Nielsen after claiming President Trump would’ve been responsible for the death of baby Jesus.

He should feel pretty embarrassed.

Gutierrez then stormed out of the House Judiciary Committee hearing on immigration and border security after Department of Homeland Security (DHS) Secretary Kirstjen Nielsen attempted to respond to his baseless claim that she was a “liar.”

Gutierrez: “It is repugnant to me, and astonishing to me, that during Christmas — I like to call them the holiday seasons to be inclusive, but during Christmas because the majority always wants to just call it Christmas — that during Christmas, a time in which we celebrate the birth of Jesus Christ, a Jesus Christ who had to flee for his life with Mary and Joseph, thank God there wasn’t a wall that stopped him from seeking refuge in Egypt. Thank God that wall wasn’t there, thank God there wasn’t any administration like this, or he would have to have perished on the 28th, on the Day of the Innocents, when Herod ordered the murder of every child under two years of age.”

“Maybe I haven’t gone a lot to Bible school, but I know that part. Thank God. Shame on everybody that separates children and allows them to stay at the other side of the border fearing death, fearing hunger, fearing sickness. Shame on us for wearing a badge of Christianity during Christmas, and allow the secretary to come here and lie.”

There are, in fact, gang members with “significant criminal histories” embedded within the migrant caravan making its way to the United States.

It appears President Trump was spot-on.

.@DHSgov can confirm that there are individuals within the caravan who are gang members or have significant criminal histories.

Citizens of countries outside Central America, including countries in the Middle East, Africa, South Asia, and elsewhere are currently traveling through Mexico toward the U.S.

Stopping the caravan is not just about national security or preventing crime, it is also about national sovereignty and the rule of law. Those who seek to come to America must do so the right and legal way.

Trump said the Honduran migrant caravan (with some people reportedly from Congo, Bangladesh, and other nations) is paid for, and “Democrats had something to do with it.”

CNN anchor Jim Sciutto asserted multiple times that Trump was incorrect, writing, “DHS did not provide evidence of a single terrorist caught at the southern border over the very last short period of time as the president claimed.”