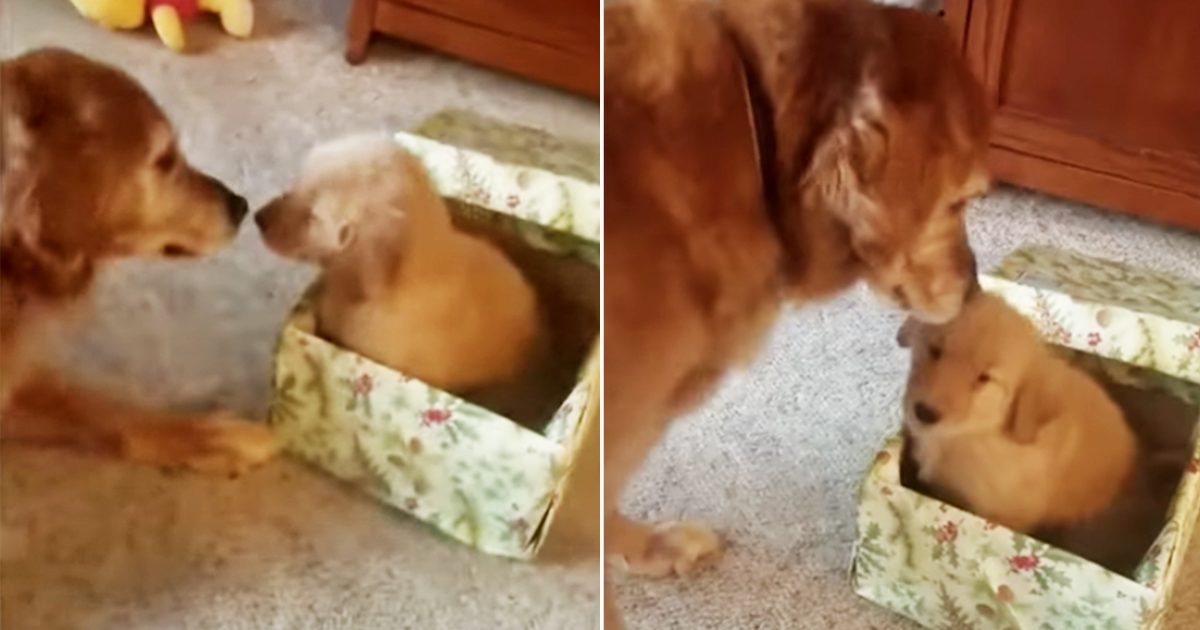 We normally think of humans as getting the most enjoyment out of the holiday season, but in the case of one-year-old golden retriever Minnie, her owner used a Christmas gift to help Minnie cope with anxiety, and it paid off big time.

According to PetMD, anxiety can be debilitating in some dogs, causing howling, indoor urination and defecation, injurious activity, and can even lead to aggressive outbursts if the anxious dog is not handled sensitively.

For owner Nicolette Hall, giving up on Minnie wasn’t an option. Instead, she got creative with an adorable Christmas gift to help her pup overcome her anxiety.

In an adorable video which has since gone viral, Minnie can be seen eyeing a gift box and running laps around it before stopping to give it a curious sniff.

That’s when tiny little Parker, an 8-week-old golden retriever, pokes his adorable head out of the box.

“She has really bad fears and anxiety so we figured getting a new friend will help her come out of her shell,” Hall said, according to Liftable.

At first, Minnie was naturally anxious at the sight of Parker, a fluffier, miniature version of herself.

After a few quick moments, the sweet new friends began bonding and giving each other playful kisses.

“It was kinda like love at first sight,” Hall said, describing the moment Minnie met her new little brother. “Minnie has always loved other dogs and having friends, now she has someone to grow up with and to help her be brave!”

Hey, even dogs need friends! What a sweet way to use Christmas to bless this sweet creature with her own special pal.

WATCH: Dwayne Johnson’s “Golden Ticket” Gift for His Mother Will Move You to Tears