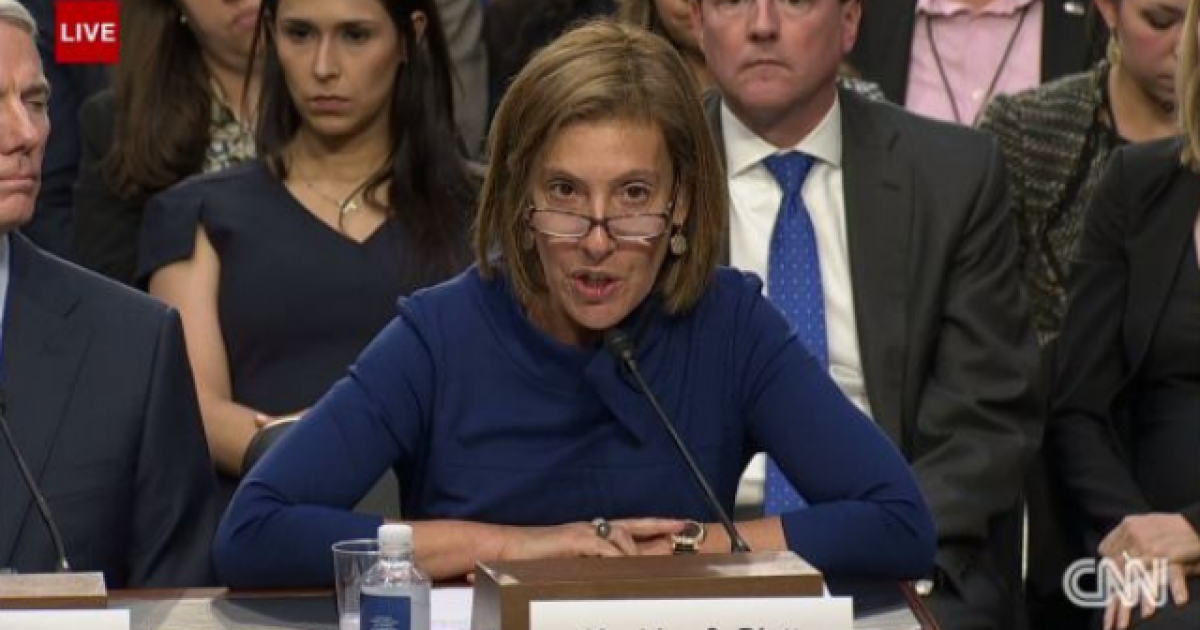 Here’s one of the craziest things about the Trump-era hysterical left.

They’re so adamantly opposed to Trump on every level, they wouldn’t recognize “moderate” if it smacked them in the face.

This week they’ve been too busy donning Handmaid’s Tale outfits and being dragged, kicking and screaming out of the proceedings to notice that…Kavanaugh isn’t super conservative.

In fact, he was recently grilled by Senator Lindsey Graham on the constitutionality of Roe v. Wade, and Kavanaugh’s responses left much to be desired for the pro-life movement.

He is, however, a very solid judge with an admirable background that any sensible person, right or left, would have to agree qualifies him to serve on the Supreme Court. Unfortunately, Congress and Democrat voters often show a very significant lack of sense…something that has been on full display over the last week.

There is one lawyer on the left, however, who has, to her great credit, come out in support of Kavanaugh, and her words remind us all that Supreme Court justices are not appointed to favor one ideology or the other, but rather to interpret the founding documents upon which our nation was founded.

In a very striking video, she explains her endorsement for Kavanaugh, and, despite being a Hillary voter and proud Democrat, her reasoning is, indeed, quite sensible.

Successful and influential attorney Lisa Blatt, who says she has argued more cases before the Supreme Court than any other woman in history, explained to the Senate last week why she’s putting her emphatic support behind Kavanaugh:

My name is Lisa Blatt, and I know Judge Kavanagh in my capacity as an appellate lawyer here in Washington. I have argued 35 cases before the Supreme Court of the United States – more than any other woman in history. I am also a liberal Democrat and an unapologetic defender of a woman’s right to choose. My hero is Justice Ruth Bader Ginsburg, for whom I had the great fortune of serving as a law clerk. I proudly voted for Hillary Clinton. I voted for President Obama twice. And with my apologies, Mr. Chairman, for this one, I wish Senator Feinstein were chairing this committee. And yet I am here today to introduce Judge Kavanaugh, and urge the Senate to confirm him as the next associate justice of the Supreme Court.

I’ve received many angry calls from friends and even strangers for supporting Judge Kavanaugh, but I was raised to call it like I see it, and I don’t see the choice before you as difficult. By any objective measure, Judge Kavanaugh is clearly qualified to serve on the Supreme Court. After law school, he clerked for Justice Anthony Kennedy, the justice he would succeed. He spent twelve years on the nation’s most prestigious Court of Appeals, the United States Court of Appeals for the District of Columbia Circuit.

Judge Kavanaugh’s judicial temperament and integrity are also flawless. He is meticulously prepared, and he treats litigants with respect, asking probing questions of both sides. He approaches judging by determining what the law requires, no matter his personal preference.

Judge Kavanaugh has taught at the nation’s top law schools, published thoughtful law review articles, and co-authored a leading treatise on judicial precedent, and as just mentioned, the ABA strongly endorsed him because “he meets the very highest standards of integrity, professional competence, and judicial temperament.”

On a personal level, I just can’t say enough nice things about the judge. I first met him almost ten years ago when he emailed me completely out of the blue to say that he liked an article I had written about arguing before the Supreme Court. Since then, we’ve become friends, and he has become a mentor to me in my career.

Judge Kavanaugh has spent countless hours listening to me talk about the challenges I have faced as a working mother in a profession dominated by men. He has been a great source of advice on these and many other issues about work-life balance. He understands that life is not always perfect, and he responds to life’s challenges with a self-deprecating sense of humor.

More generally, Judge Kavanaugh has been remarkably committed to promoting women in the legal profession. More than half of his law clerks have been women – something that is sadly by no means common. And almost all of his clerks, women and men, have gone on to clerk at the Supreme Court, including for Justices Kagan and Sotomayor.

As his former women law clerks told this committee, the legal provision is “[fairer] and more equal” because of Judge Kavanaugh. He’s mentored countless other women through the classes he teaches at Yale and Harvard Law Schools. Obviously, I know that Judge Kavanaugh has a conservative judicial outlook, and if he is confirmed he will have one of nine votes to definitively decide the meaning of the Constitution, including just how far to read it to protect the reproductive rights of women.

Now, if it were up to me, Justice Ginsburg would have all nine votes – but that’s not our system, and the reality is that the presidency and the Senate are in Republican hands. Judge Kavanaugh is the best choice that liberals could reasonably hope for in these circumstances.

I am sure that some members of the Senate knew that they would disagree with Justice Ginsburg’s legal views when she was a nominee, but Justice Ginsburg was confirmed 96 to 3. This body has obviously treated some nominees differently since then to the detriment of our courts.

I strongly disagree with the Senate’s treatment of Judge Garland. Judge Kavanaugh himself spoke glowingly of Judge Garland during his pending nomination, stating that, “Chief Judge Garland is a brilliant jurist. He’s thoughtful, he’s considerate, he’s collegial, he works well with others. He’s a good man – great integrity. And he’s supremely qualified by the objective characteristics of experience, temperament, writing ability, scholarly ability for the Supreme Court.” All of this is equally true of Judge Kavanaugh.

I do not think it is fair to hold Judge Kavanaugh responsible for the fact that Judge Garland is not a justice today. Instead, I would urge this committee to treat him as we expect him to treat litigants that appear before him – on his own merits and with an open mind toward someone whose views may differ from our own. Our judicial system is not well served by tit-for-tat politics. At the end of the day, I enthusiastically support Judge Kavanaugh, and I am proud to introduce him because he is unquestionably qualified by his extraordinary intellect, experience, and temperament, and he does easily fit within the mainstream of legal thought.

I look forward to the committee over the next few days getting to know the Judge Kavanaugh that I know, and at the end of that process, I hope you will agree that he should be confirmed to succeed his former boss on the Supreme Court.

The NRA, In Their Legal Battle With New York AG, Gets VERY Unlikely Ally

Pro #MeToo Movement CBS Head Steps Down. The Reason Why is the Definition of Hypocrisy