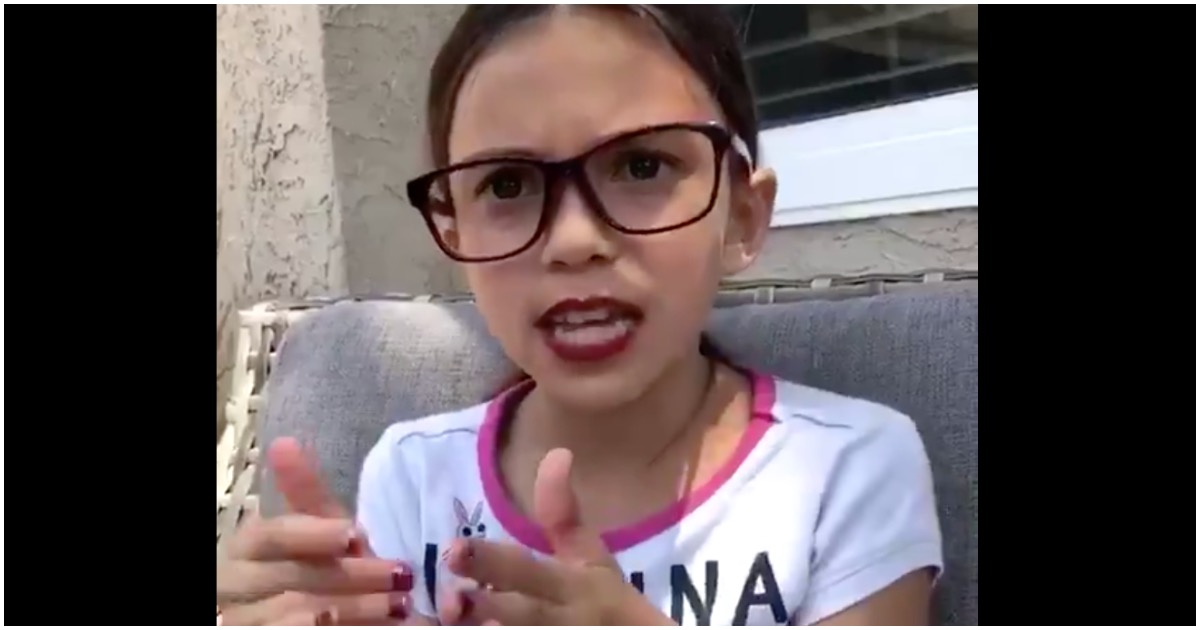 Mini-AOC back by popular demand!

Eight-year-old Ava Martinez has put out some pretty funny videos mocking freshman Democrat Socialist Alexandria Ocasio-Cortez, but this one might just be her best yet.

You be the judge.

Hope you enjoy my new re-election video. Here are some potential campaign slogans. Vote on which one I should use or send me your own slogans and I’ll read the best ones:

Hope you enjoy my new re-election video. Here are some potential campaign slogans. Vote on which one I should use or send me your own slogans and I’ll read the best ones:

So many great one-liners poking fun at Ocasio-Cortez in just a short video.

In her previous video, Ava starts, “Like, hello America, AOC, here again, but this time from Washington, D.C., which is named after our first president — George Washington D.C. Like, I want to tell you about my plan to single-handedly save the planet. I call it the Green New Deal. I picked green because I’m still learning my colors. I came up with my plan after we were watching, like, the most important documentary on climate change. It’s called Ice Age 2: The Meltdown. That’s not me saying it, that’s science.”

As long as Ava #miniAOCofficial enjoys doing these videos she will continue to keep making them and as long as #AlexandriaOcasioCortez keeps being #AOC we will have plenty of material to keep making them as well. Thanks again to everyone who had kind things to say about Ava. pic.twitter.com/Je7YojRoXd

REVEALED: Barack & Michelle Obama Ink Another Massive Deal That Could Net Them Millions

The U.S. government’s congressional watchdog has determined that President Trump and his administration are guilty of breaking the law by withholding hundreds of millions of dollars of military aid from Ukraine during the summer of 2019. The Government Accountability Office published a nine-page report on Thursday that concluded the Officer of Management and Budget violated the Impoundment Control Act when it refused to release $214 million set aside as aide to Ukraine. Here’s more from The Washington Examiner: “Faithful execution of the law does not permit the President to substitute his own policy priorities for those that Congress has enacted into law,” the independent legislative branch agency concluded. “The Office of Management and Budget withheld funds for a policy reason, which is not permitted under the Impoundment Control Act. The withholding was not a programmatic delay. Therefore, we conclude that the Office of Management and Budget violated the Impoundment Control Act.” The determination comes the same day that the impeachment trial against President Trump related to allegations of abuse of power in Ukraine is set to kick off in the Senate. “The Constitution grants the President no unilateral authority to withhold funds from obligation,” the Government Accountability Office said. “Instead, Congress has vested the President with strictly circumscribed authority to impound, or withhold, budget authority only in limited circumstances as expressly provided in the Impoundment Control Act.” How much this information will impact the impeachment trial remains to be seen, but it’s definitely not going to make matters any easier for President Trump going forward.

Sen. Martha McSally proved in a recent spat with a CNN reporter that she is not the kind of individual you want to mess with. McSally was asked about recent developments that have been unfolding would make her change her mind about impeaching President Trump. To say the answer was a resounding no would be an understatement. McSally ripped into the reporter calling him a “liberal hack.” Someone’s been taking lessons on counterpunching from President Trump. Check out the details from The Washington Examiner: On Wednesday night, Rudy Giuliani’s Ukrainian associate Lev Parnas claimed that “Trump knew” about all of the shady efforts taking place in Ukraine, including the alleged stalking of U.S. Ambassador to Ukraine Marie Yovanovitch. Parnas said, “President Trump knew exactly what was going on. He was aware of all my movements. I wouldn’t do anything without the consent of Rudy Giuliani or the president.” On Thursday morning, CNN reporter Manu Raju tried to ask the Arizona Republican about the developments and how it could change her impeachment vote. He asked, “Senator McSally, should the Senate consider new evidence as part of the impeachment trial.” She responded, “Manu, you’re a liberal hack. I’m not talking to you.” Raju followed up, “You’re not going to comment.” McSally brushed him off and echoed her earlier retort of calling him a “liberal hack.” https://twitter.com/mkraju/status/1217822020848771074 McSally went on to double down on her claim about Manu being a liberal hack in a video posted to Twitter: https://twitter.com/SenMcSallyAZ/status/1217829609808547841 Well, she’s not wrong. Perhaps Manu is still in the first step of denial about the role he is playing in the modern media? Regardless, he certainly got served by McSally, extra crispy on both sides.

The U.S. government’s congressional watchdog has determined that President Trump and his administration are guilty of breaking the law by...

Sen. Martha McSally proved in a recent spat with a CNN reporter that she is not the kind of individual...

Co-host of the Morning Joe, Mika Brzezinski drew a line in the sand over the current dispute raging on between...

Dems are melting down...

And the truth has finally been revealed...

What Is Life to the Fullest?
January 17th, 2020 True Conservative Pundit