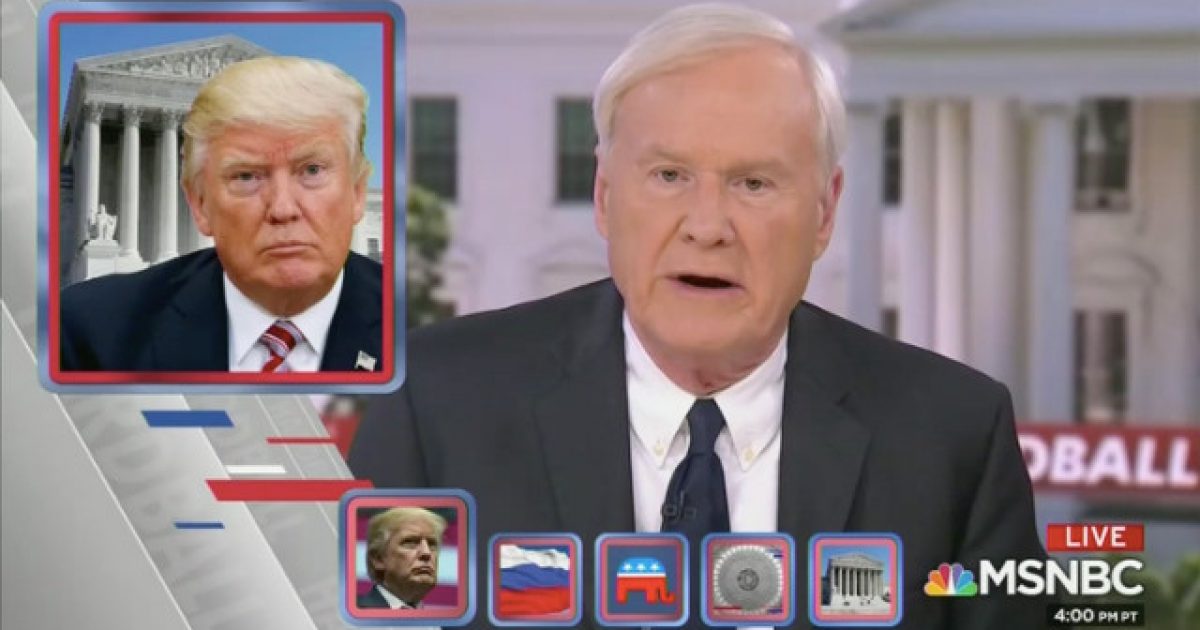 MSNBC host Chris Matthews had yet another one of his typical, overemotional meltdowns on his “Hardball” program Tuesday evening, following the decision delivered by the Supreme Court concerning Trump’s travel ban.

Matthews dedicated two separate rants to his feelings about the ruling, opening up the program with a monologue that can only be described as shrill and bordering on hysterics.

“They’ve done it again,” Matthews opined. “The usual suspects the five-man Republican majority on the Supreme Court today gave President Trump what he wanted most: The Good Housekeeping seal on his campaign to divide the country and approving his travel ban crudely aimed at Muslims, the Republican-controlled highest court has shined up the entire Trump offensive on Muslims, Latinos and, let’s not kid ourselves, Democrats.”

The news anchor whined, “As I said, Donald Trump’s dark brand of politics received the Supreme Court’s seal of approval today. Five justices reviewed in favor of president trump’s travel ban, the cleaned up version of his Muslim ban. The court chose to focus on the text of the policy rather than Trump’s prior inflammatory tweets and public comments.”

“And then ten years after making W. President and repowering the country’s war machine into Iraq, the Supreme Court put the cherry on the top giving total political power to the one force the highest court favors even more Republicans, money,” he continued. “The Citizens United case gave those with big money the unlimited license to change the course of elections. Embraced and beloved by Republicans, the Citizens United ruling brought down the last barrier between those with money and the power to direct the country’s affairs. No wonder so many people are telling pollsters now how little they care about a democracy so increasingly run by the Republican dollar.”

Matthews is a typical bleeding heart liberal who thinks from emotions rather than with logic, refusing to allow facts to guide him into ultimate truth and reality.

The travel ban has nothing to do with racism. It has everything to do with holding countries who sponsor terrorism accountable for their actions and encouraging them to stand up boldly against radical Islamists, which ultimately makes the whole world safer, not just America.

Terrorists have been taking full advantage of our immigration system to come to this nation from the countries on the travel ban list and nothing is being done to prevent this from happening. We must take action if we want to prevent these individuals with nefarious intentions from getting into America and harming our citizens.

VIDEO: Dan Rather Tries to Smash on Trump, It Totally Backfires on Him

Supreme Court Delivers Yet Another Massive Blow to Democrats