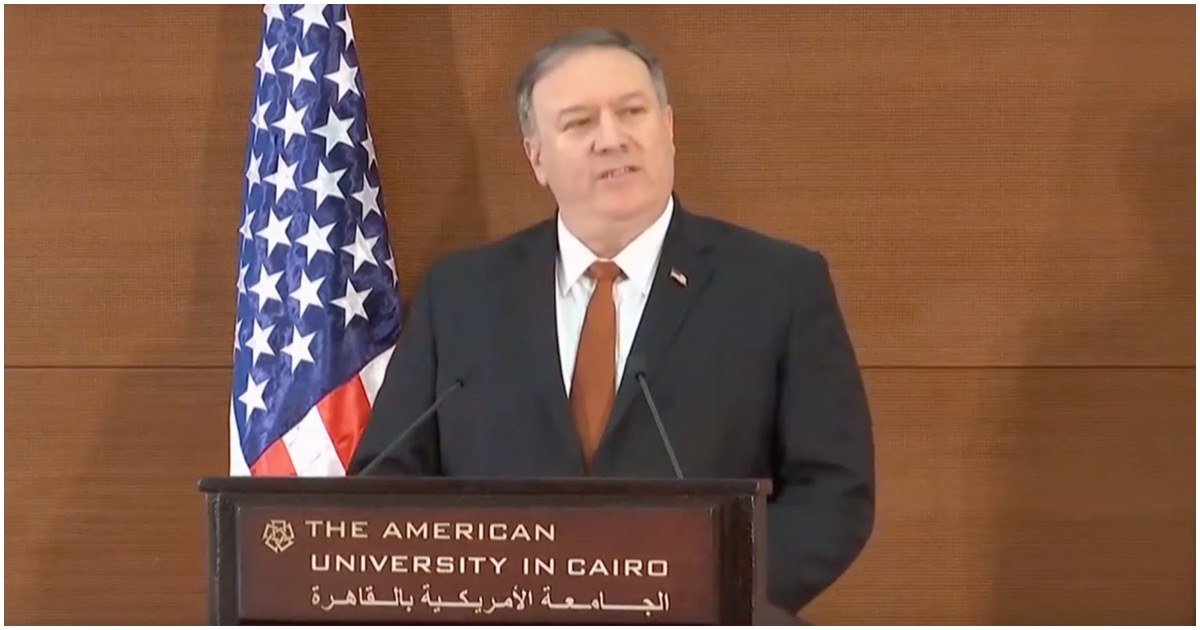 Secretary of State Mike Pompeo is one of President Trump’s strongest allies.

While in Egypt, the former head of the CIA made sure to put Barack Obama’s 2009 Cairo speech to shame.

On Thursday, Secretary of State Mike Pompeo, speaking in Cairo, gave an amazingly comprehensive and powerful speech about the Middle East and America’s strength and commitment in which he eviscerated former President Barack Obama for his speech in Cairo in 2009, asserting, “The age of self-inflicted American shame is over.”

Pompeo stated bluntly, “Egypt has always been a land of striving. And yet at times, your aspirations and those of your brethren in the Middle East have seemed impossible to achieve. These lands witnessed convulsions from Tunis to Tehran as old systems crumbled and new ones struggled to emerge. That’s happened here, too.”

Part of the speech:

And at this critical moment, America, your long-time friend, was absent too much. Why? Because our leaders gravely misread our history, and your historical moment. These fundamental misunderstandings, set forth in this city in 2009, adversely affected the lives of hundreds of millions of people in Egypt and all across the region.

It was here, here in this city, that another American stood before you. He told you that radical Islamist terrorism does not stem from an ideology. He told you that 9/11 led my country to abandon its ideals, particularly in the Middle East. He told you that the United States and the Muslim world needed, quote, “a new beginning,” end of quote.

We grossly underestimated the tenacity and viciousness of radical Islamism, a debauched strain of the faith that seeks to upend every other form of worship or governance. ISIS drove to the outskirts of Baghdad as America hesitated. They raped and pillaged and murdered tens of thousands of innocents. They birthed a caliphate across Syria and Iraq and launched terror attacks that killed all across continents.

It is important to know also that we will not ease our campaign to stop Iran’s malevolent influence and actions against this region and the world. The nations of the Middle East will never enjoy security, achieve economic stability, or advance the dreams of their people if Iran’s revolutionary regime persists on its current course.

February 11th will mark 40 years since the oppressive regime came to power in Tehran. America’s economic sanctions against the regime are the strongest in history, and will keep getting tougher until Iran starts behaving like a normal country. The 12 demands that we stated in May remain in force, because the regime’s threat to the region endures.

In Syria, the United States will use diplomacy and work with our partners to expel every last Iranian boot, and work through the UN-led process to bring peace and stability to the long-suffering Syrian people. There will be no U.S. reconstruction assistance for areas of Syria held by Assad until Iran and its proxy forces withdraw and until we see irreversible progress towards a political resolution.

In Lebanon, the United States will work to reduce the threat of Hezbollah’s missile arsenal, which is aimed at Israel and can reach all points inside of that country. Many of these rockets are equipped with advance guidance systems, courtesy of Iran, and that’s unacceptable. Iran may think it owns Lebanon. Iran is wrong.