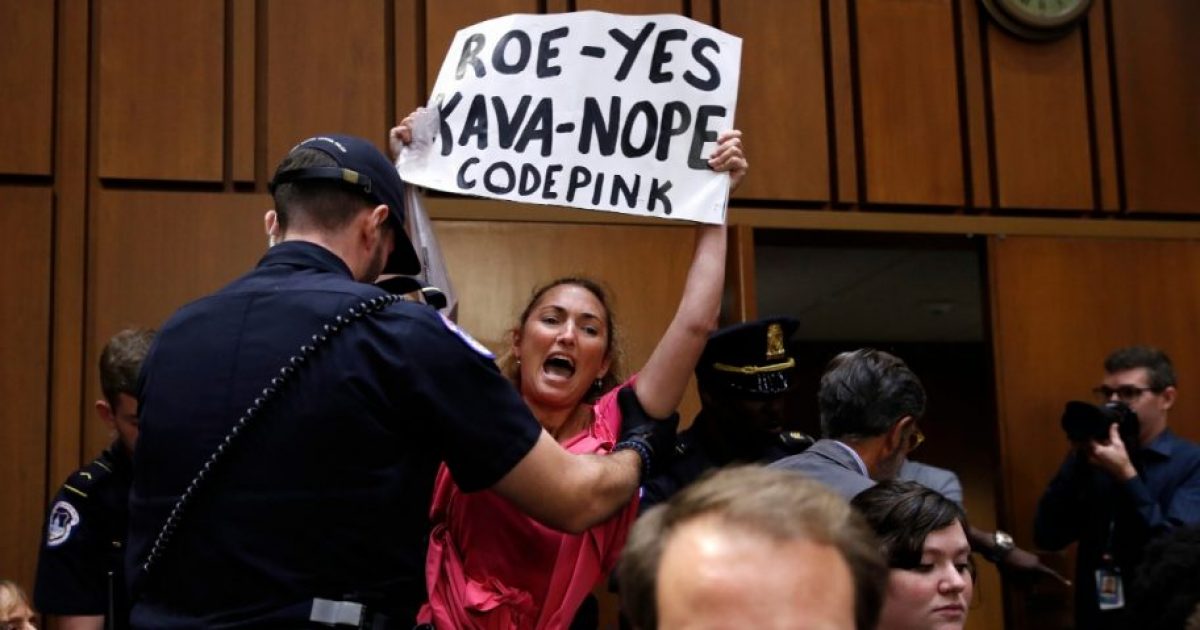 We’re lucky the left has been much better at causing chaos, drama, and disruption over the last few years than they have at actually electing anyone.

With midterms looming over Democratic Congressmen, far-left protesters with a rabid, tunnel-vision desire to see Roe v. Wade upheld are–figuratively and literally–screaming at their elected officials to do everything possible to stop Kavanaugh’s appointment to the Supreme Court.

They’re pulling all the stops out, and showing up to overwork security at the first day of his confirmation hearing is clearly their first line of defense–after posting pouty pictures in Handmaid’s Tale costumes on social media, of course.

Witin[sic] the first few minutes of the hearning, one of the protesters began to yell and held up a shirt that read, “Be a hero and cancel this hearing.”

Another woman yelled out that Kavanaugh would “overturn” her daughter’s future while holding up a T-shirt with pictures of her daughter. Still another yelled, “If you vote for Brett Kavanagh, we will replace you.”

One of the protesters took a shot at President Donald Trump and mentioned that he couldn’t nominate someone to the Supreme Court.

“An illegitimate president cannot make a lifetime appointment to the Supreme Court,” the woman said. She added that the hearing should be an “impeachment hearning.”

Bahaha–a girl can dream, can’t she?

The chaos didn’t end when security removed the protesters, either, because, again, the politicians within are desperate to make a good impression on the unhinged masses before they head to the voting booth in November:

In total, Capitol police removed six women from the chamber who continued to yell as they were escorted out. Republican Sen. Chuck Grassley of Iowa, chairman of the Senate Judiciary Committee, thanked the officers for their service, but then was faced with more protests from the Democratic senators.

Just seconds into his opening statement, Democrats began to interrupt Grassley and asked to postpone the hearings citing the fact that 42,000 Kavanaugh-related documents were released to the committee on Monday.

“Mr. Chairman, I would like to be recognized to ask a question before we proceed. The committee received just last night – less than 15 hours ago – thousands of documents that we have not had a chance to read or review or analyze. We cannot possibly move forward.” pic.twitter.com/IWSeM6AtNx

Another day, another leftist temper tantrum in the Trump era.

Nike Makes Colin Kaepernick the Face of Their Brand. Look What Happened Immediately After.