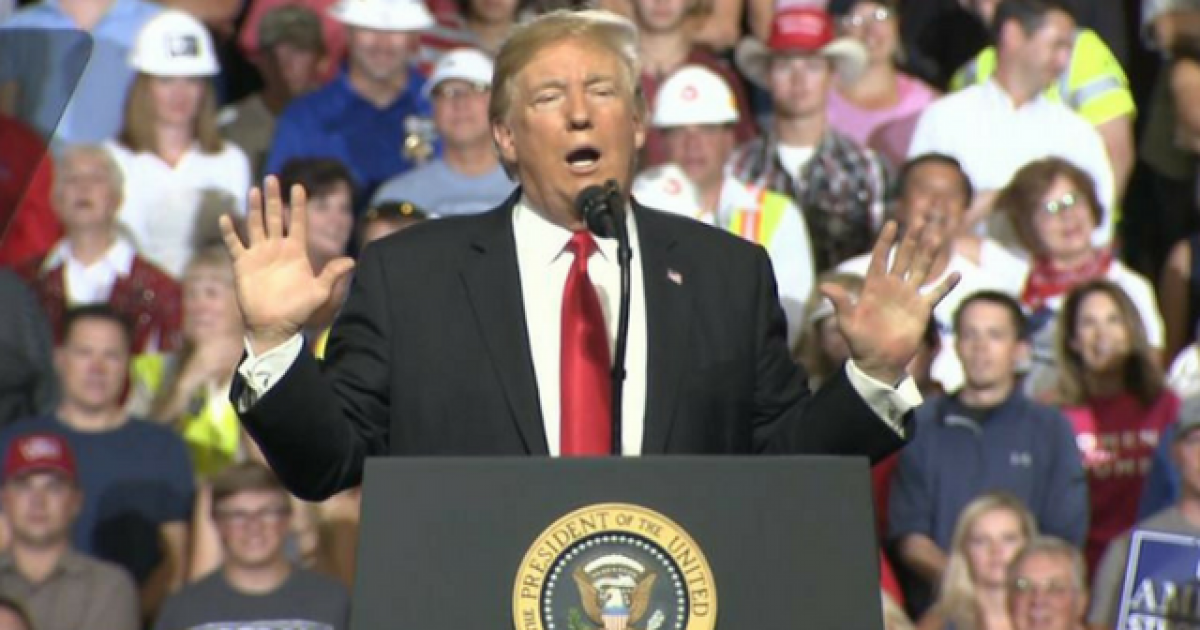 Dems absolutely hate to admit it, but Donald Trump is hilarious, and he knows just how to hit his opponents where it hurts while putting the rest of us in stitches.

As campaigning for November midterms and anticipation of the 2020 Presidential race heat up, Trump can’t help but poke fun at the dismal Democratic party prospects for President, and at a rally Thursday, he had entirely too much fun imagining what would happen if Sen. Elizabeth Warren was his opponent.

Warren, a blonde-haired, blue-eyed paleface, has, for decades been claiming Cherokee heritage largely due to her “high cheekbones” and some old family stories.

She even went as far as to claim to be the first woman of color to be tenured as a professor at Harvard University. This has, understandably, caused actual Cherokee to question her dubious claims. She has been called out more than once for not only refusing to take a DNA test but for failing to answer to Cherokee geneologists who claim there isn’t a scrap of evidence she has one drop of Cherokee blood.

It doesn’t have to be stated that this is incredibly offensive to actual Native Americans.

So all this makes Trump’s comments on Thursday all the more hilarious:

Speaking at a rally for Republican Senate candidate Matt Rosendale, he mused to the crowd what it would look like if he were to debate Sen. Warren in the 2020 election:

“But let’s say I’m debating Pocahontas, I’ll do this,” Trump said. “I promise you I’ll do this, you know those little kits they sell on television for $2? ‘Learn your heritage.’ I’m going to get one of those little kits and in the middle of the debate, when she proclaims she’s of Indian heritage — because her mother said she has high cheekbones, that’s her only evidence.

“We will take that little kit — we have to do it gently because we’re in the Me Too generation, so we have to be very gentle,” Trump continued in a mocking tone. “We will very gently take that kit and we will slowly toss it, hoping it doesn’t hit her and injure her arm, even though it only weighs probably 2 oz.”

“And we will say, ‘I will give you a million dollars, paid for by Trump, to your favorite charity if you take the test and it shows you’re an Indian,'” Trump told the crowd in Great Falls. “And we’ll see what she does. I have a feeling she will say no, but we will hold it for the debates.”

Trump threw in another quick shot at Warren before he was done. “Pocahontas, I apologize to you. To the fake Pocahontas, I won’t,” Trump said.

If this doesn’t make you crack up, there’s something wrong with you.