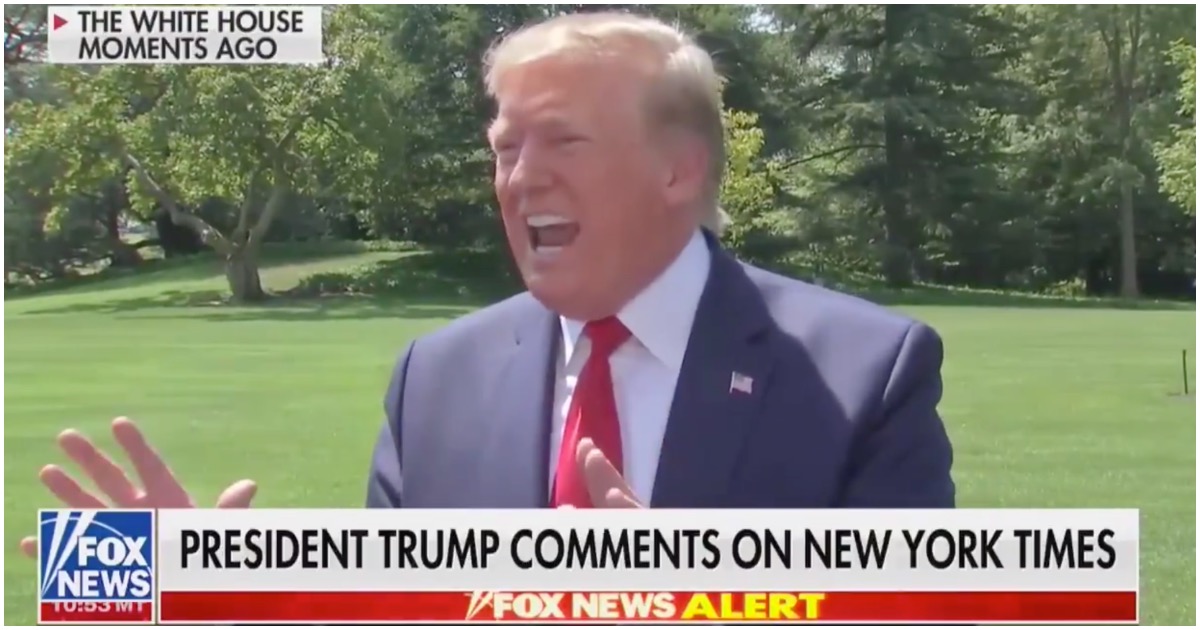 There are few moments in the past couple of decades when Donald Trump has not been must-see TV.

If one thing’s for certain, it’s that the president loves to win at everything – especially when it comes to confrontation.

Check out the way 45 handled an embattled NBC reporter.

President Donald Trump slammed NBC News’ Peter Alexander on Wednesday for masquerading as a reporter while acting like a Democratic activist and declared that NBC News was even worse than CNN.

Alexander, who has a history of asking inappropriate questions, repeatedly shouted questions at the president that are often parroted by Democratic politicians as he tried to grandstand the president.

President Trump unloads on NBC News reporter Peter Alexander for his obnoxiousness and Democrat activism: “If you’d stop being an organ of the Democrats. This guy is the most biased reporter. You are so obviously biased. NBC News has less credibility with guys like you than CNN” pic.twitter.com/GXN8D9Zb4b

A certainty in life is that supporters of 2020 Democrat Socialist presidential candidate Senator Bernie Sanders (VT) are low information voters.

This has been confirmed by NBC…of all networks.

It turns out, the less you pay attention to politics, the more likely you are to support the socialist option for the 2020 Democratic presidential nomination.

WATCH: Poll shows the less you pay attention, the more likely you are to support Sanders #MTP #IfitsSunday

“The less you are paying attention, the more likely you are a Bernie Sanders supporter,” Todd says, pointing to a Monmouth poll taken recently showing that Sanders is losing definite ground to both former Vice President Joe Biden and a suddenly-much-stronger Sen. Elizabeth Warren (D-MA), who has jumped between 5 and 6 points in the polls since Biden entered the race.

The implication, of course, is that Sanders voters are “low information.” Todd’s panel seems to agree, pointing out that Warren has been working harder than Sanders at courting primary state voters, and that Warren built on Sanders’ 2016 campaign, turning what was then mere policy positions into what is now definitive policy proposals.

This is just stupid. Perhaps those who support @BernieSanders don’t need to pay attention to your daily MSM driveling because they know he’s been consistent on POLICY for years and years. 😳 https://t.co/Vb7rkFT8Tk

It is obvious that Chuck Todd and others at NBC (owned by corporate Comcast) are Biden supporters. They are afraid of Bernie. They constantly try to spin things against Bernie. https://t.co/eiWbAmDpKX

So, the less you consume anti-Bernie propaganda, the more likely you are to support him? I hope someone got paid a lot of money to uncover that gem. https://t.co/wUblLser34

Democrat Councilwoman Refuses to Be Sworn In On the Bible, Uses Dr. Suess Book Instead