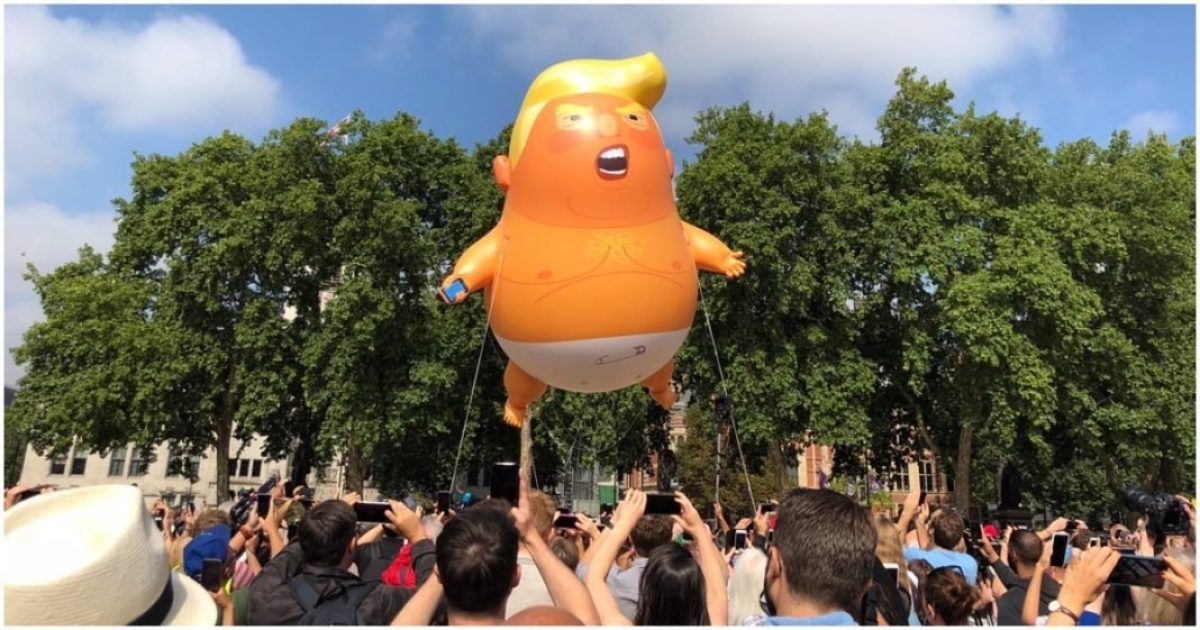 Of all the ways to stick it to President Trump, a blimp featuring his likeness as a baby is what some people came up with?

One pro-Trump woman was arrested after popping the balloon.

Infamous far-right troll Amy Dalla Mura, who goes by "Based Amy," stabbed the Trump baby today but also appears to have nicked herself on her own knife. She was arrested immediately afterwards.https://t.co/ouA5C25az4 pic.twitter.com/fmDFTSYXnK

Here’s a pic of the deflated balloon:

Trump Blimp assaulted with a sharp object. Workers trying to resuscitate it in vain pic.twitter.com/7G49cdOoVr

For those of you asking, Trump Baby was only lightly wounded in today's attack and stands at full pressurisation.

Ricky Gervais might be a liberal and an atheist but the man is arguably a comedic genius. This is easily evidenced by his numerous popular stand-up specials.

While bashing his fellow lefties for assaulting Britain’s Nigel Farage, Ricky was quickly forced to defend his liberal ideals due to the backlash he received for calling out certain far-left radicals.

As reported by CNN International earlier this month, “Police ordered a McDonald’s in Scotland to stop selling milkshakes over fears people would dunk them over Brexit campaigner Nigel Farage, staff said, after a flurry of incidents left prominent far-right activists doused in the creamy liquid. Farage, the leader of the Brexit Party, was holding an event in Edinburgh on Friday ahead of next week’s European elections.”

Still, earlier in the week, Farage was dunked with a banana and salted caramel milkshake from a Five Guys restaurant by a left-wing protester after giving a short speech regarding coming European elections, The Daily Wire reported.

I voted remain. I would still like to stay in Europe. I will argue with people who disagree me, always respecting their right to do so. What I won’t do is throw things at them. That would mean I had run out of good arguments. It would also mean I deserve a smack in the mouth.

I voted remain. I would still like to stay in Europe. I will argue with people who disagree me, always respecting their right to do so. What I won't do is throw things at them. That would mean I had run out of good arguments. It would also mean I deserve a smack in the mouth.

Here’s where he’s forced to defend himself:

I’m an old fashioned liberal lefty, champagne socialist type of guy. A pro-equality, opportunity-for-all, welfare state snowflake. But, if I ever defend freedom of speech on here, I’m suddenly an alt right nazi. How did that happen?

Remember the woman who glued her own breasts to the ground to protest “global warming?”

2020 Dem Makes It Perfectly Clear: If I Become President I Am Coming For Your Guns (Details)