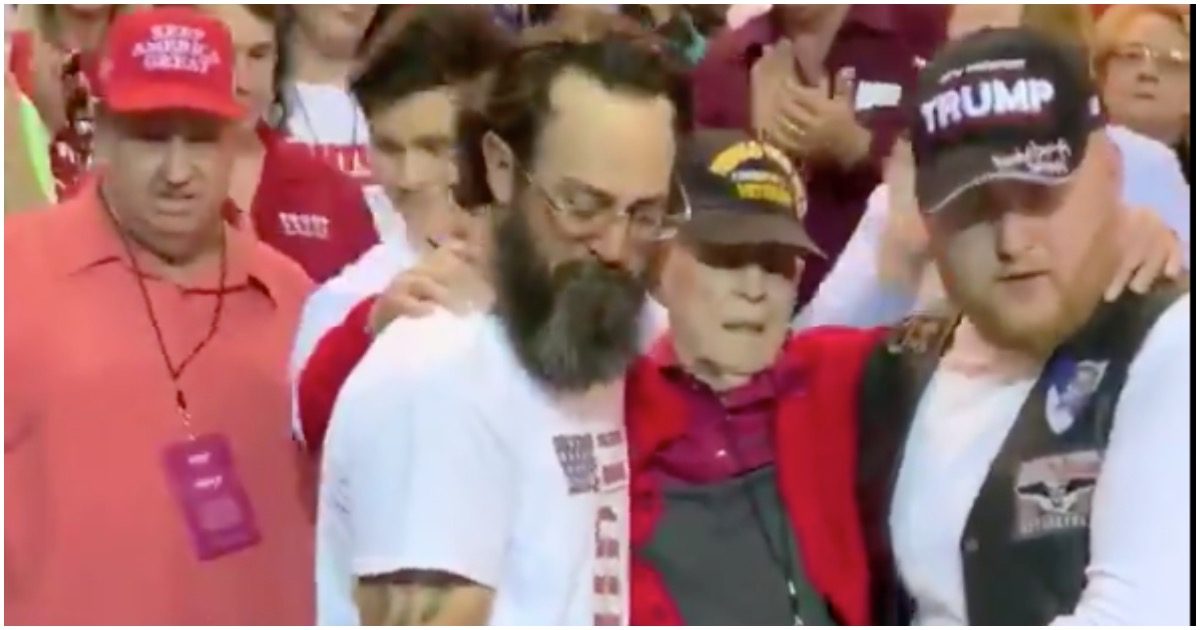 Those dang, evil, demented Trump supporters. Never causing property damage or harassing others at rallies! Always willing to help their fellow man! Too ignorant to understand that big government is the way to go! How do these people sleep at night?

Liberals have painted the president and his base as racist, sexist, homophobic neanderthals for years, still unwilling to admit that those exact folks are the ones who make the country great. And that’s the sad part.

Check out what happened in Arizona on Wednesday evening, via Daily Wire:

Supporters of President Donald Trump carried a World War II veteran to his seat at a rally for the president on Wednesday evening in Phoenix, Arizona, which quickly caught the attention of the president.

This happened at the @realDonaldTrump rally in Phoenix. Lots of teamwork here. These men carrying a World War II veteran to his seat. Got to admit I got a lump in my throat pic.twitter.com/E8vV8gthQn

.@DonaldJTrumpJr talks about the two gentlemen that carried the World War II Veteran to his seat at the Trump Rally.

Trump’s event at Arizona Veterans Memorial Coliseum is the first of three rallies in three days. He won Arizona over Hillary Clinton in 2016 by about 3.5 percent, but Sen. Kyrsten Sinema, a moderate Democrat, narrowly defeated Republican Sen. Martha McSally, in 2018.

After Arizona, Trump is scheduled to take his tour to Colorado Springs, Colorado, on Thursday, and then Las Vegas on Friday, just before the critical Nevada caucuses Saturday.

More tweets from the rally…

Here is the line for the Trump Rally in Phoenix tonight!

Weeks ago, I announced that I was going to my FIRST Trump Rally in Phoenix Arizona (driving 6 hours). I decided to extend an invitation to Telemundo, so they can cover the Latinos who support POTUS!

They replied today, and they WILL cover us! We have a voice! 🇺🇸🇺🇸 pic.twitter.com/xY6bRSLYXH

Trump supporters are the best!

Joe, a @realDonaldTrump supporter on line for the Phoenix rally tonight, bought dozens of donuts for other supporters on line so they don't get hungry.

This LGBT supporter came from Los Angeles to tonight’s #TrumpRally in Phoenix, Arizona, to show his appreciation for what President Trump is doing to fight HIV/AIDS.

“I’m appreciative of what he’s doing for our community!” pic.twitter.com/SLTGlnxTS0