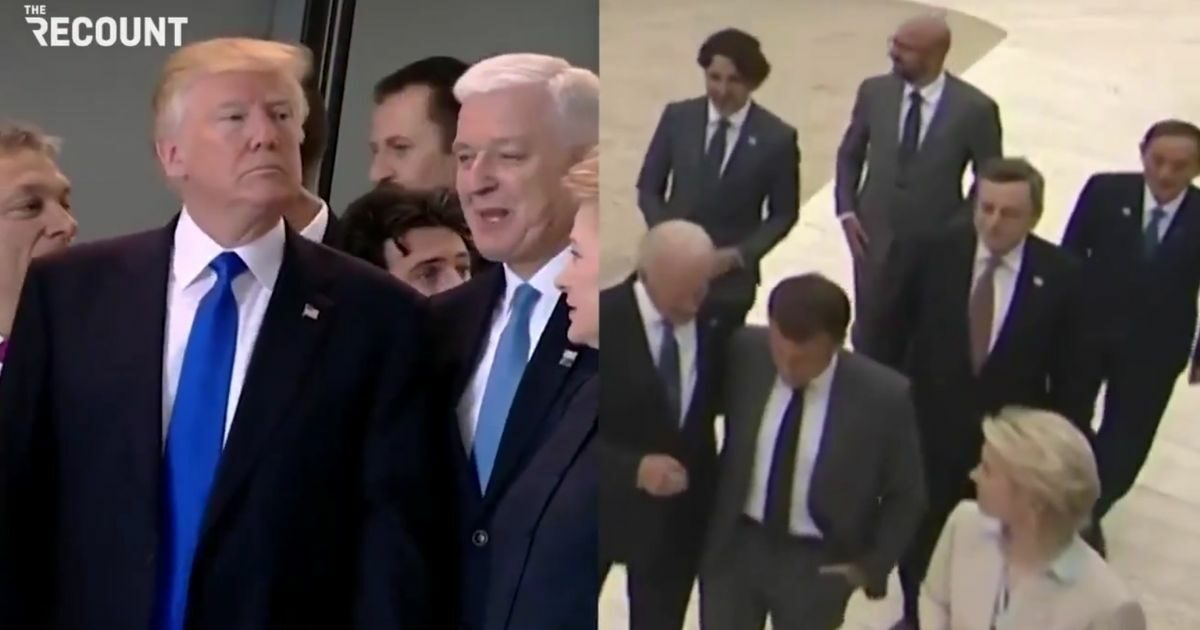 Biden had already pleased Europe’s leaders before he arrived by re-entering the Paris Climate Agreement and seeking to re-enter the Iran nuclear deal.

The Biden administration announced Thursday it was lifting some sanctions on Tehran in hopes of reigniting the stalled talks.

These agreements are detrimental to the U.S. economic and national security, but Biden, the globalist, apparently does not care.

French President Emmanuel Macron, no doubt, approves of both moves, as he was highly critical of Trump concerning the matters.

The former U.S. president didn’t agree with the European leader’s assessment. Too bad.

A few weeks ago, Biden also curried some favor among leaders in Europe by removing sanctions put in place by Trump on the Swiss-based company building the Nord Stream 2 pipeline and its CEO Matthias Warnig, an ally of Russian President Vladimir Putin, Reuters reported.

The pipeline will transport natural gas from Russia to Germany.

Biden justified the move saying, “To go ahead and impose sanctions now would, I think, be counter-productive in terms of our European relations.”

Apparently, he did not have the same concerns about Canadian relations when he pulled the approval for the Keystone XL Pipeline. That move killed approximately 11,000 American jobs and undermined the United States’ energy security.

Trump opposed the Nord Stream 2 pipeline because it made Germany and other European nations dependent on the whims of Putin to meet their vital energy needs.

The Russian leader has not been shy in the past in cutting off the flow of natural gas or threatening to do so (actual or implied) to force compliance from Ukraine.

At the 2017 G7 summit, Trump ruffled some feathers when he refused to sign onto the group’s climate initiatives.

By contrast, Biden was seen strolling arm-in-arm with Macron at the G7 on Friday with other European leaders walking close by.

Macron and Biden walked shoulder to shoulder, chatting, an arm draped around each other’s back.

At the North American Treaty Organization meeting which immediately preceded the G7 in 2017, Trump received a lot of media coverage when he pushed his way to the front of the group of leaders.

It was a kind of silly moment, but certainly, Trump was making a point that the U.S. would not be marginalized by the NATO counties, especially when the American taxpayer is footing much of the bill to fund and man the organization.

Trump also came armed with a tough message for the member nations — they needed to live up to the spending and military commitments NATO requires.

In his almost five months in office, Biden has shown himself to be inept in so many ways, but foreign policy certainly tops the list, whether it’s the Paris Climate Accord, Iran, the Keystone XL, Central America, China, the Middle East — you name it.

Robert Gates, who served as secretary of defense in the George W. Bush and Barack Obama administrations, called Biden’s overall foreign policy judgment into question in his 2014 book, “Duty: Memoirs of a Secretary at War.“

Gates wrote that the former Delaware senator — first elected to office in 1972 at the age of 29 — is “simply impossible not to like,” but he has been “wrong on nearly every major foreign policy and national security issue over the past four decades.”

In a 2014 NPR interview, Gates — who also served as CIA director in the early ’90s — rattled off examples such as Biden’s belief that Iranians’ human rights would improve following the deposing of the Shah, as well as his opposition to former President Ronald Reagan’s defense build-up, the first Gulf War and the surge of U.S. troops into Afghanistan in 2009.

“So on a number of these major issues, I just — I, frankly, over a long period of time … I think he had been wrong,” Gates said.

Gates stood by that assessment in a May 2019 CBS News interview shortly after Biden announced his candidacy for president.

“If you go back in time this is a guy who wanted to divide up Iraq. He opposed the [Osama] bin Laden raid. In favor of the phony Iran deal and sending cash to them,” Charles told Fox News.

The world felt more secure and U.S. interests clearly understood with Trump at the helm, as he put America first.

With Biden’s love for globalism and placing Americans’ interests last, the U.S. seems destined to enter some choppy waters ahead.