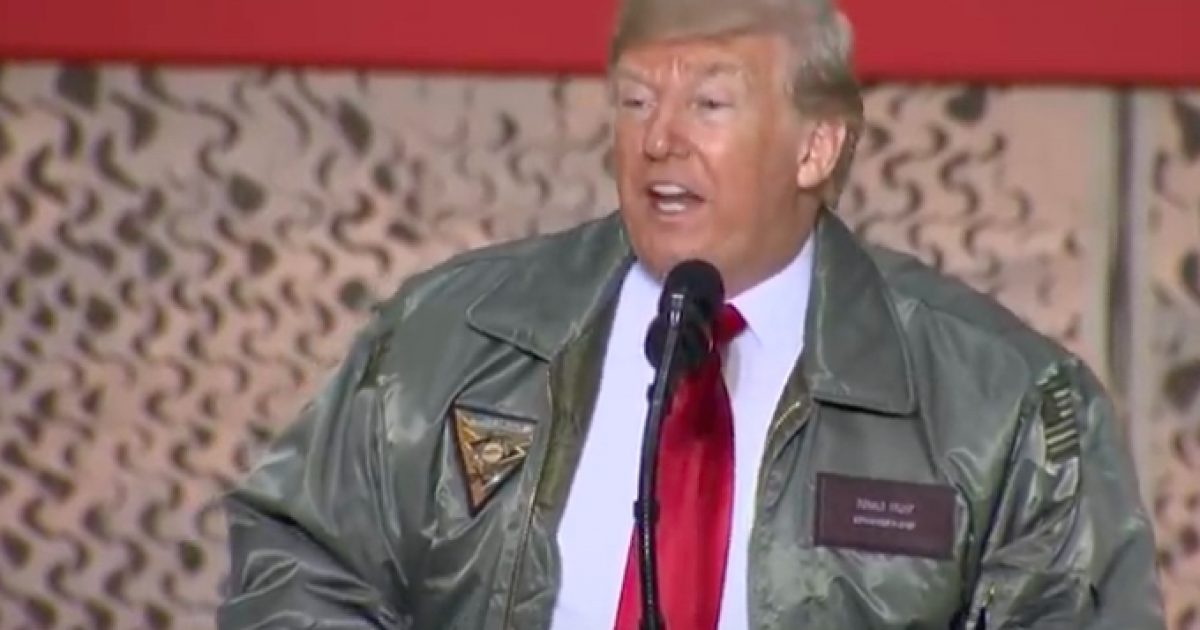 In a surprise Christmas visit to our troops in Iraq, President Donald Trump told our soldiers that the U.S.A. is “no longer the suckers” due to his military policies and their fighting spirit.

Trump and First Lady Melania hopped a military flight to visit the troops even as the press pool wondered just where the president was over the last few days. Turns out Trump slipped the press and winged his way to Iraq when they weren’t looking.

According to the Daily Mail:

President Donald Trump and first lady Melania Trump made a surprise visit to Iraq on Wednesday — their first visit to a war zone since the sitting president took office nearly two years ago.

They left from Joint Base Andrews in Maryland shortly after midnight with a small group of journalists and aides in tow. Trump was in the country for roughly three hours before the White House confirmed his whereabouts.

The president delivered a speech to the rank and file at Al Asad Airbase, took selfies with the troops and met with military leaders in Iraq.

“I want to come and pay my respects most importantly to the great soldiers,” he said of the visit. “Great troopers we have here.”

This visit comes on the tail of Trump’s announcement that he intends to begin pulling all U.S. troops out of Syria, a move that surprised many, including his own supporters.

“We’re no longer the suckers, folks,” the president said of the decision to leave Syria. “We’re respected again as a nation.”

The president also noted that he has been telling his generals to wrap it up for months.

“They said again, recently, can we have more time? I said, ‘Nope. You can’t have any more time. You’ve had enough time. We’ve knocked them out. We’ve knocked them silly,'” he said of ISIS’ operations in Syria. “I will tell you that I’ve had some very good talks with President Erdogan who wants to knock them out also and he’ll do it. And others will do it to. Because we are in their region. They should be sharing the burden of costs and they’re not.”

Related Topics:Donald TrumpFeaturediraqISISmilitarytroops
Up Next

Putin’s Caribbean Paradise Revealed to be Next NUCLEAR BOMBER BASE