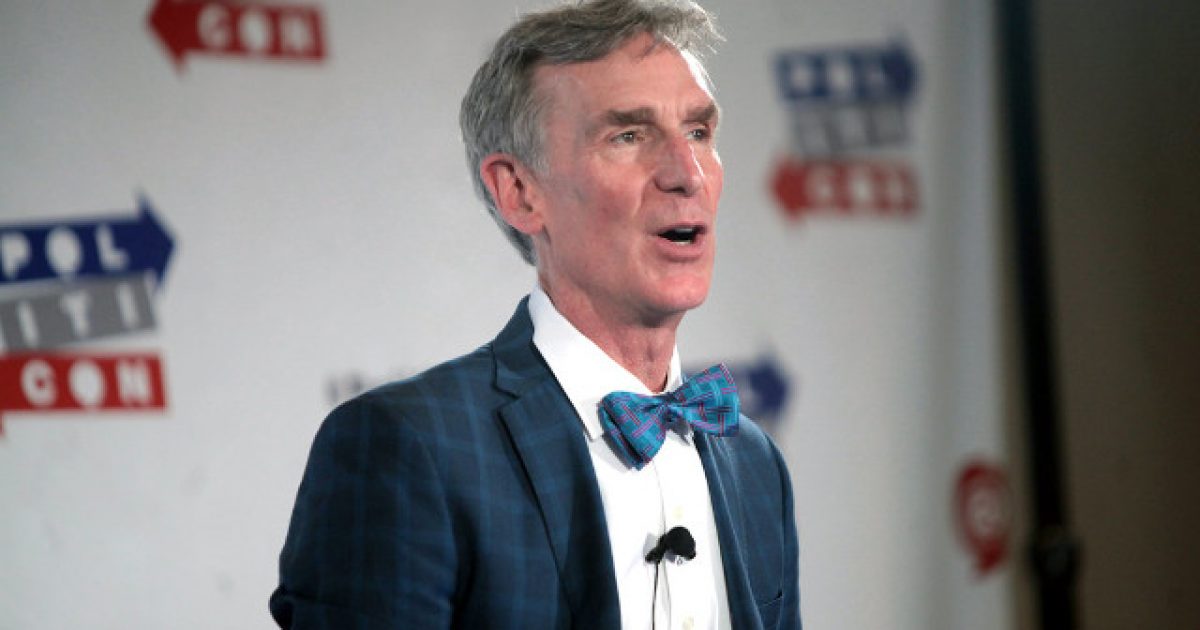 According to fake scientist and climate change activist Bill Nye, denying climate change is for old people and is akin to being a flat-earther, a point which totally ignores the fact that the earth being round is truly an issue that has been resolved with conclusive evidence and climate change has not.

This man isn’t even a legitimate scientist. He’s a former children’s show host, and yet, for some odd reason, folks on the left adore Nye and have legitimized his platform to speak on issues he knows nothing about.

Nye, most famous for his long-running kids’ show “Bill Nye the Science Guy,” told NBC News’ Mach — its hub for technology and innovation — that proponents of climate denialism will eventually die out.

“It is infuriating to have people in the United State denying science,” he began. “The same country that sent people to the moon, for crying out loud. You look for reasonable explanations, cause and effect — I’m just not clear on what’s going on with so aggressively denying science.”

Nye went on to compare climate change deniers to flat-earthers — a fringe group of people who believe that the earth is, indeed, flat, and not actually spherical.

“It’s almost like [climate change deniers are] in ‘The world is flat’ camp,” he marveled. “The world’s not flat. Humans are causing climate change. Pretending it’s not happening is not in anyone’s best interest.”

Look, if I’m being totally honest and transparent here, which is typically something I like to shoot for in my writing, there’s very few things that drive me bat crap insane, but flat earth folks are on that list.

The science on a spherical earth is conclusive. It’s overwhelming. People who deny this critical component of our reality are ignoring plain, simple, observable fact.

Climate change, however, is far from settled. Much of the science being done conflicts, which points to the fact that we don’t know enough about what’s happening to draw a definitive conclusion.

Yes, climate change exists, but the real question we’re seeking the answer to is whether or not humanity is playing a role in that shift and change or whether it’s simply the planet recalibrating itself.

It seems the latter is what is really going on and the left is using the concept of manmade climate change to justify the use of regulation to gain a greater foothold on the means of production and to redistribute wealth.

I guess time will tell.

Alyssa Milano Recently Spoke About Her Two Abortions; What She Says Is Horrific And Sad