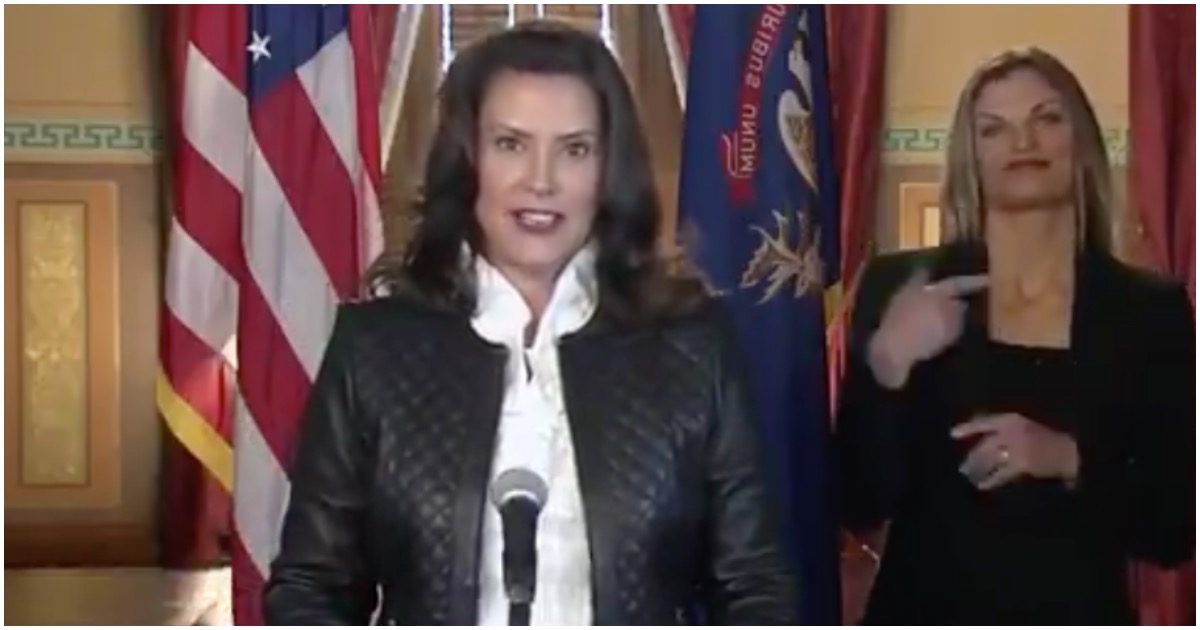 The Supreme Court of Michigan recently made clear that Governor Gretchen Whitmer (D) has abused her power during the pandemic. She was also recently spurned by Joe Biden for VP.

On Thursday, news broke that a bunch of people were plotting to kidnap the governor.

Michigan Gov. Gretchen Whitmer accused President Trump on Thursday of providing a “rallying cry” to hate groups after the FBI uncovered a plot by individuals connected to an anti-government militia to abduct her ahead of the presidential election.

In her first public comments on the plot, Whitmer thanked the FBI, Michigan attorney general Dana Nessel and state police for “bringing these sick and depraved men to justice.” She argued that Trump has provided tacit support to radical groups by refusing to condemn white supremacy, referencing the president’s comment during last week’s debate that the Proud Boys, a far-right group unaffiliated with the kidnapping plot, should ‘stand back and stand by.’”

#BREAKING: Gov. Gretchen Whitmer slams Trump in response to kidnapping plot: "'Stand back and stand by.' Hate groups heard the President's words not as a rebuke, but as a rallying cry. As a call to action." pic.twitter.com/c0U5HdAh1T

A total of 13 men face federal and state charges in connection to the plot to allegedly target Whitmer, local police and the state Capitol. The FBI said the six men charged in federal court had spent months planning and rehearsing a kidnapping in response to Whitmer’s response to the coronavirus pandemic.

The thing is, the ringleader hates “tyrant” Trump.

Wow! This is big. Brandon Caserta, one of the ringleaders of the group of men arrested for a plot where the group planned to kidnap Gov. Gretchen Whitmer, hated President Trump too!

"Trump is not your friend dude"

He says Trump is "a tyrant" & calls President Trump an "enemy". pic.twitter.com/T5paEeTkiJ

Governor Whitmer of Michigan has done a terrible job. She locked down her state for everyone, except her husband’s boating activities. The Federal Government provided tremendous help to the Great People of Michigan. My Justice Department and Federal Law Enforcement announced…

…today that they foiled a dangerous plot against the Governor of Michigan. Rather than say thank you, she calls me a White Supremacist—while Biden and Democrats refuse to condemn Antifa, Anarchists, Looters and Mobs that burn down Democrat run cities…

…I do not tolerate ANY extreme violence. Defending ALL Americans, even those who oppose and attack me, is what I will always do as your President! Governor Whitmer—open up your state, open up your schools, and open up your churches!

Whitmer recently decided to build an eight-foot wall around the governor’s mansion. You know, to keep bad people out.

Gov. Gretchen Whitmer’s current home is getting an 8-foot-tall wall built around it and other security updates, leaving taxpayers with a $1.1 million bill.

So, Gretchen should now be able to concede that a wall on America’s southern border with Mexico would be beneficial to Americans, right?

$40 BILLION for the wall. Think how many kids that would educate, how many roads, bridges and pipes it would fix. https://t.co/R9HaqLAsMZ

Biden In Phoenix: ‘You’ll Know My Opinion On Court Packing When the Election Is Over’