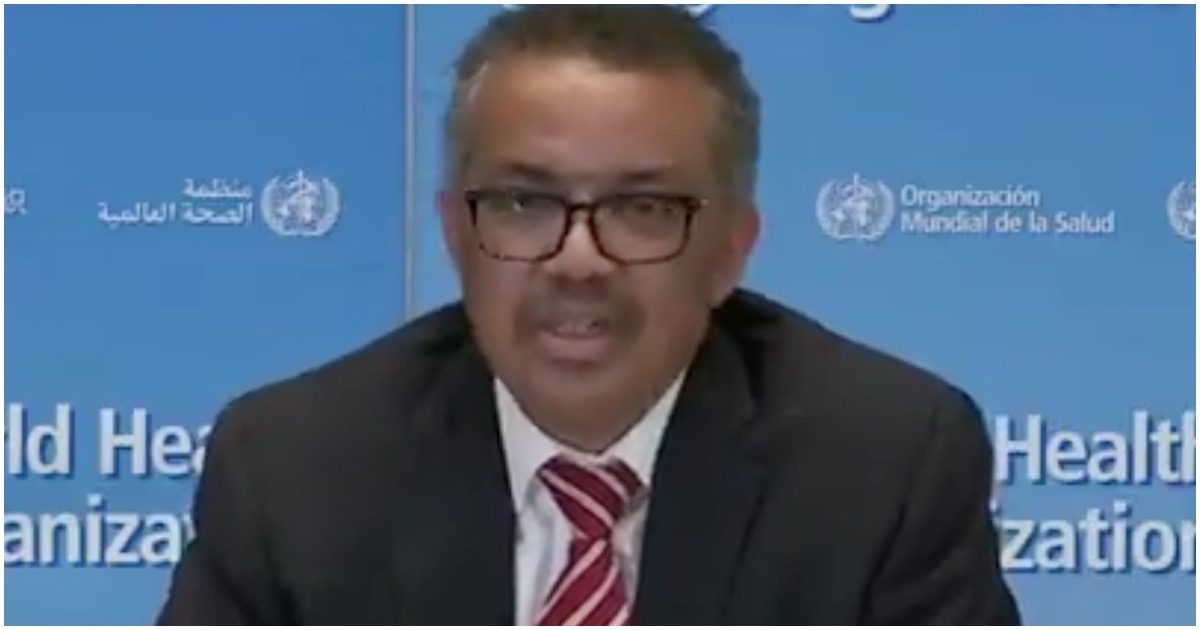 Just the other day, President Trump put a “very powerful hold” on funding to the World Health Organization due to their bumbling response to the coronavirus pandemic.

Many people have accused WHO of running interference for the Chinese communist regime.

In fact, WHO even admitted to ignoring an early warning from Taiwan so as to not anger China.

BREAKING: President Trump says he is putting a hold on funding to the @WHO pic.twitter.com/GqjI4lqfqU

On Wednesday, the head of WHO, Tedros Adhanom Ghebreyesus, went after Trump.

The remarks came after Trump sharply criticized the WHO during a White House coronavirus task force briefing Tuesday night and suggested he might put a hold on U.S. funding — the largest single source of money for the health organization.

Tedros did not refer to Trump by name as he stressed the importance of confronting COVID-19 as a common enemy. And he stated several times that he does not mind being targeted by personal attacks. Everyone’s focus, he said, should remain on the coronavirus, not political or international rivalries.

A Taiwanese Baseball Team Plans To Have Robots In The Stands In Place Of Fans When The Season Starts This Weekend https://t.co/UB6Mlne8BR pic.twitter.com/0BA5rSsX5U

We should all send some love to @TiaraBrownBox, the @WorldBoxingOrg #NABO 130lb champion and soon-to-be world champion, who is also a full-time Washington, D.C. police officer putting herself in danger each day to help keep the public safe. @DiBellaEnt #boxing #coronavirus https://t.co/Dl5u0dlF0G

Grandpa, describe March 2020 for me:
pic.twitter.com/dhMh8ss4ET

The NHL Playoffs Were Supposed To Start Today, Here Are The Best Hockey Night In Canada Playoff Montages To Get You Through https://t.co/OGdrO8IjJR pic.twitter.com/Gi58vtuHEX

"I don't want to get into petty arguments about it," the actor said (via @toofab)https://t.co/0fGxvlAWrp

Lots of damning stuff in here on Cuomo’s role in NYC becoming a Coronavirus epicenter https://t.co/LDlWX4T7AD