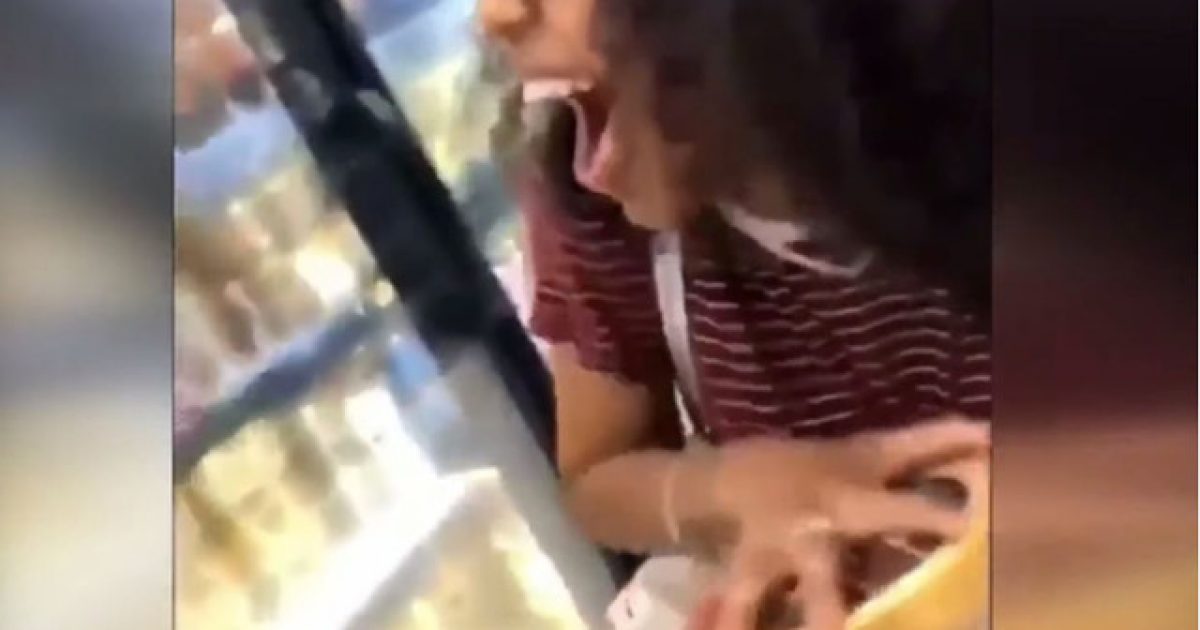 There is no shortage of sickening and twisted people floating around the world today, which is a truth we all know, but when you actually see video footage of these animals doing disgusting things that could impact other people, it’s shocking to the senses.

A woman recently posted a video of herself licking ice cream from a container in Walmart and then placing it back on the freezer shelf, thinking her joke was a real hoot.

Well, she’s not laughing anymore, because she could end up spending 20 years behind bars.

The viral video has been viewed millions of times on social media and inspired some copycat ice cream lickers.

Texas police on Wednesday said that they had identified her after detectives “obtained surveillance video placing a woman matching the suspect description in the Lufkin store on June 28 around 11 p.m.”

They say they are awaiting positive identification before issuing a warrant for her arrest.

In an email to NBC News, the Lufkin police department indicated that she was facing a second-degree felony charge of tampering with a consumer product.

Blue Bell Creameries labeled the incident a “malicious act of food tampering.” In order to ensure no one received the container, the company pulled all similar tubs of ice cream from store shelves.

Here’s the video in case you want to throw up:

This is absolutely disgusting in every conceivable way. The woman in question definitely deserves some sort of punishment for this incident. Doing something like this could spread diseases and all sorts of things.

Not to mention the money this cost Blue Bell since they had to pull all the tubs of ice cream off the shelves. It’s despicable, disrespectful, and disgusting. No doubt copycatters will emerge because of the popularity of the video, so this woman needs to be made an example of quickly.

Be cautious what you consume from the store folks. Make sure the food you buy is sealed properly — if it is supposed to be sealed — that is, and tell the store if you catch someone doing something like this so they can stop them and promptly remove the item from the shelf.

Kamala Harris Butchered Biden At Debates, Then Flip-Flopped On Same Issue She Roasted Him Over