A Massachusetts man recently told police that earlier this week he was stopped at a red light when a woman pulled up behind him and began honking her horn in a belligerent manner. Then things really got crazy.

He stated the driver then followed him down another road, still honking the horn and now screaming at him. And if you think things couldn’t get any nuttier, you’d be oh so wrong.

They actually got worse. Way worse.

“I could hear her screaming out of the car or something, so I’m like, ‘Man, maybe something’s wrong with my car,’” said the man identified by WBZ-TV only as “Brendan” for his safety.

Well, apparently there was something wrong with his car — affixed upon it is a bumper sticker supporting President Donald Trump with his campaign slogan, “Make American Great Again.” 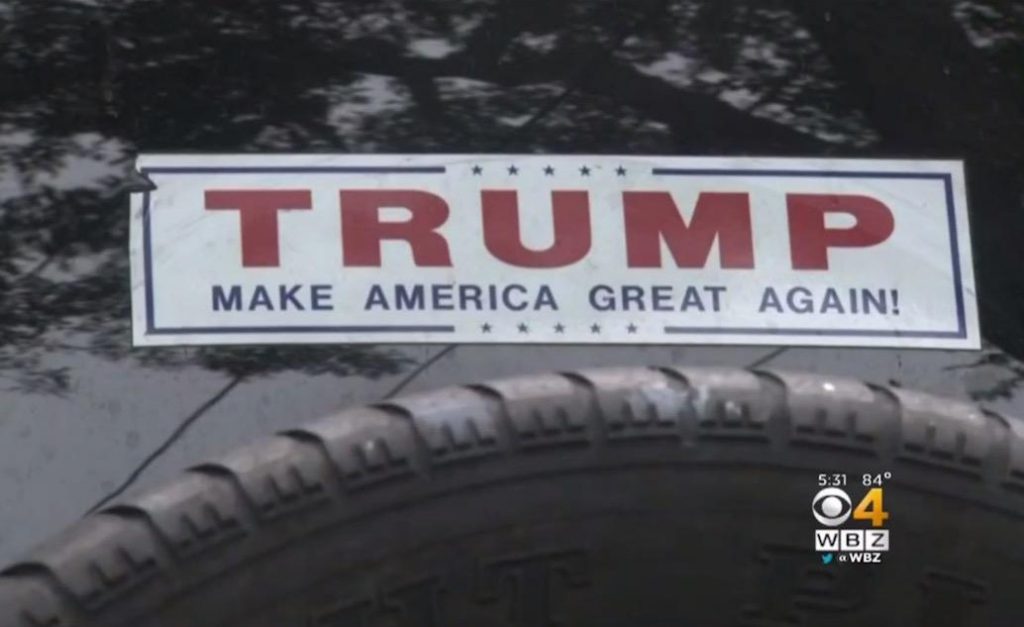 Brendan added to the station that “the first thing she said when I came out of the car was, ‘Did you vote for Trump?’ And I was like, ‘Yeah, what of it?’”

With that, he told WBZ, the driver yelled, “You’re racist!” along with “a bunch of cuss words” coming at him “nonstop.”

But that wasn’t the worst of it.

Brendan recorded video of the incident as the driver first allegedly hit the back of his car then clipped his open door, missing him by inches, WBZ said.

“Her tire was right next to my foot,” Brendan recalled to the station. “That could have ended really bad.”

The driver promptly fled the scene, however the video taken of the incident captured the vehicle’s license plate number, which was then traced to Chloe Wright of Taunton.

Wright was arrested by authorities on Monday and she has plead not guilty to a charge of assault with a deadly weapon. She will also be facing charges of vandalizing property and fleeing the scene of property damage.

The woman was released on $1,250 bail and has been ordered to stay away from the victim.

Why is it the left claims over and over again that Trump supporters are evil, angry, violent people, meanwhile, it’s their own people trying to run folks over, shoot people, and make all sorts of horrible threats and comments? Seems like they need to get their own house in order before telling someone else what to do with theirs, right?

Biden spoke truthfully and - based on some of his statements from previous years - what he believes at some heart level.
By Randy DeSoto, The Western Journal  July 4, 2022 Comment MoreShare

A major county Democratic Party is celebrating the holiday by cursing the Fourth of July, citing the end of Roe v. Wade.
By Richard Moorhead, The Western Journal  July 4, 2022 Comment MoreShare

Texas Mom Warns of Terrifying New Scam: 'I Thought That Somebody Had My Baby'

'I have to presume, for my mental health, that this person - that this was a fluke,' the mother said of the harrowing incident.
By Amanda Thomason, The Western Journal  July 4, 2022 Comment MoreShare

'I've gotten a big earful on this from clear across the state, it's not even from that neighborhood,' the state agriculture commissioner said.
By Andrew Jose, The Western Journal  July 4, 2022 Comment MoreShare

The government claims that its crackdown on farmers amid a global food crisis is an 'unavoidable transition' to improve the environment.
By Andrew Jose, The Western Journal  July 4, 2022 Comment MoreShare

'The issue is, these aren’t just any recalls: These are serious and, most worryingly, basic problems - an engine combusting, a tire rolling off.'
By Jack Davis, The Western Journal  July 4, 2022 Comment MoreShare
Next