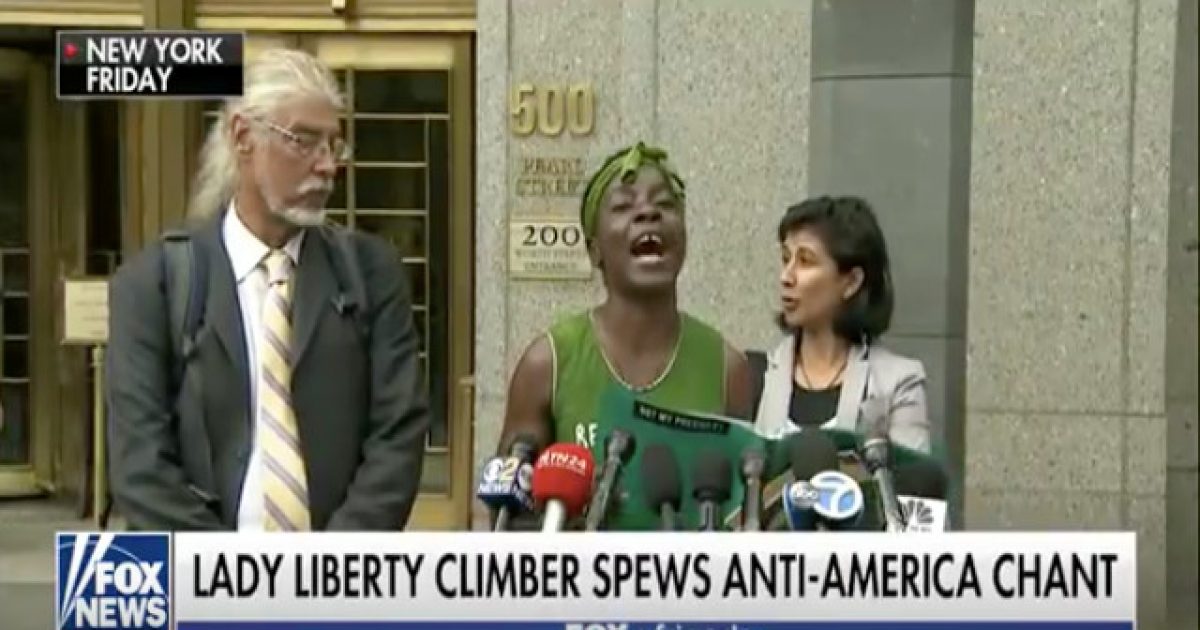 The activist who climbed the base of the Statue of Liberty on July 4th took an opportunity outside of a Manhattan Court to give an anti-American chant during a news conference on Friday of last week.

Therese Okoumou is facing charges of trespassing, interference with government agency functions and disorderly conduct. If convicted, she could face up to a year and a half in prison.

However, she appeared outside Manhattan federal court Friday wearing a dress that said, “I really care, why won’t u?” before beginning what she called her “song.”

“America, you motherf–kers! You drug addicts! You KKK! You fascist USA,” she shouted to her supporters.

Okoumou’s stunt forced the evacuation of Lady Liberty, and she had reportedly told investigators that she was taking part in a protest against the president’s immigration policies.

“They’ve been this forever,” he said. “They’re the anti, anti-Communist. They’re against us. Everything we stand for, they’re against.”

“That is who the radical far-left is!” Bongino said. “That’s it!”

First off, can someone please explain why this lady is screeching like a cat being pulled through a taffy puller? Good grief that sound is like nails on a chalk board.

Secondly, who, exactly, is keeping her here in this country? If she hates this place so much, why not work, save up some money and get the heck out? Why in the world would you continue to live somewhere you claim to hate? Life is too short for that.

Perhaps she wants her cake and to eat it too? She wants all of the benefits of liberty and freedom, but all of the free stuff that comes with socialism. Sorry, but you can’t have it all. Freedom is not compatible with socialism.

Man Threatens Violence Against House GOP. The Amount of Ammo Found in His Home is Mind-Blowing.