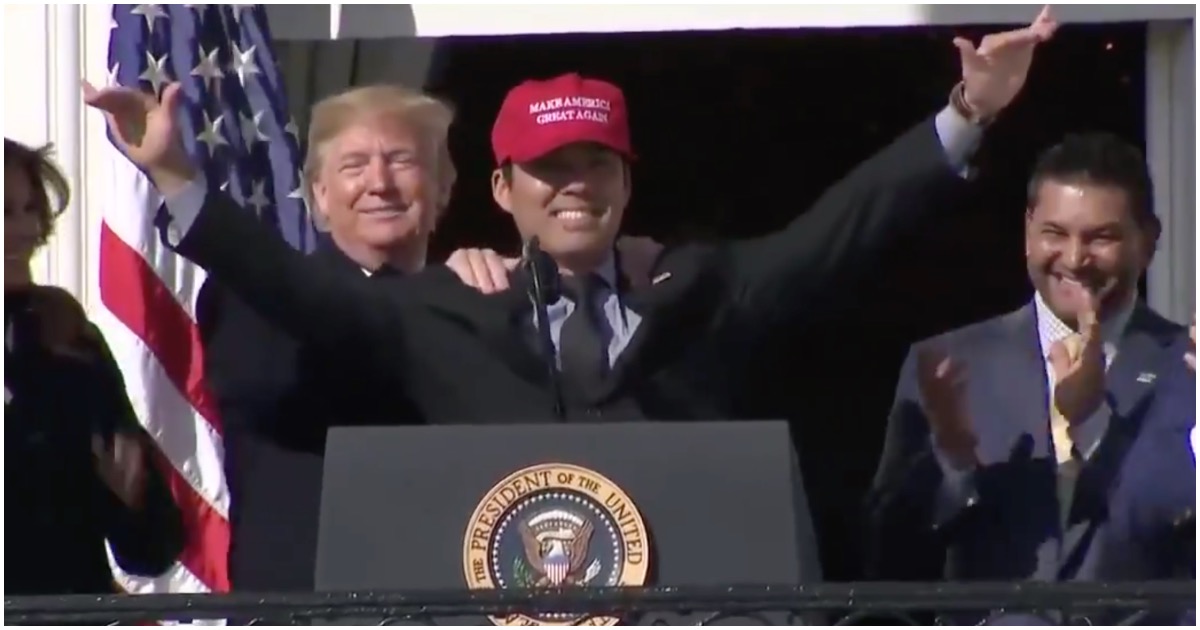 The Washington Nationals weren’t supposed to be World Series champions. Heck, they hardly even made it into the playoffs, defeating the Milwaukee Brewers in the National League Wild Card game.

But sports wouldn’t be fun to watch if we knew the outcome of games. If we knew the Nats would take down the Houston Astros in seven, people wouldn’t have tuned in. But nobody saw it coming. And it happened. That’s what makes sports so great.

During Washington’s visit to the White House on Monday, journeyman catcher Kurt Suzuki, a playoff hero for the Nats 2019 season, donned a MAGA cap while speaking from the podium. As you’d expect, some lefties weren’t thrilled.

Well, I guess my love affair with the Nats is over… and I spent all that time at the parade on Saturday. Dang!

Well, I guess my love affair with the Nats is over… and I spent all that time at the parade on Saturday. Dang!

Hope he gets booed off the face of the planet on opening day https://t.co/ZW1XDnIWFw

This is the equivalent of intentionally drinking toilet water.

This is the equivalent of intentionally drinking toilet water. https://t.co/guf19Pci2n

this is the one time I feel bad for Nationals fans

this is the one time I feel bad for Nationals fans https://t.co/95f40LS5D7

Crap, I liked Suzuki too…

First baseman Ryan Zimmerman, the first pick in Nationals history, had a warm message for Trump upon gifting him with a Nationals jersey…

There’s always at least one goof in the bunch. Congrats, Sean Doolittle.

You’ve managed to win a World Series and show the nation that you’re anti-American in just under one week’s time.

Washington Nationals relief pitcher Sean Doolittle has decided to skip the team’s visit to the White House to celebrate their World Series win, because he does not like the president’s rhetoric.

Doolittle insisted that Trump’s rhetoric “enabled” white supremacists and racists. ” That never really went away, but it feels like now people with those beliefs, they maybe feel a little bit more empowered. They feel like they have a path, maybe. I don’t want to hang out with somebody who talks like that,” he exclaimed.