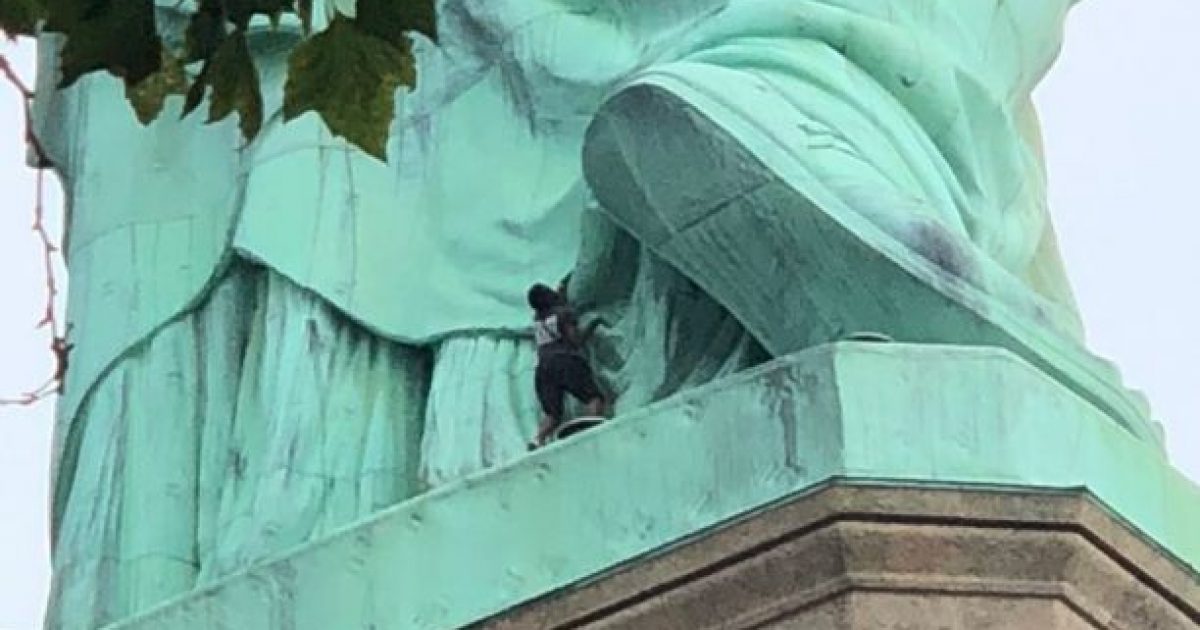 Don’t you like how leftists have jumped from speaking out against the policy of separating children from their parents to calling for the complete abolition of a necessary federal agency in the span of a week?

I mean, were they not content to simply keep protesting Trump? Do they not realize that ICE doesn’t make policy?

At any rate, logic doesn’t seem to play a huge role in what is driving leftist hysteria over border policies, because emotion and sensation seem to play a much bigger role.

Enter: the lady for whom LEOs had to shut down Liberty Island on the 4th of July because of her ridiculous protest.

On Wednesday, one female protester who climbed the base of the Statue of Liberty to protest against U.S. immigration policy forced thousands of visitors who wanted to visit the iconic statue on Liberty Island on July 4 to evacuate the island when she would not leave.

The woman was part of a group of roughly 40 protesters from the group Rise and Resist who were carrying a banner calling for the abolishment of Immigration and Customs Enforcement (ICE).

Therese Okoumou ignored police requests to come down for four hours before two officers climbed up to the base and took her to a ladder where she climbed down 25 feet to the monument’s observation point, where she was taken into custody.

Jay W. Walker, an organizer with Rise and Resist, said the group had no idea that Okoumou would make the climb, but claimed it would help the group’s cause, according to AP.

I have only one question for Mr. Walker….how?!

Here’s the stunning moment when authorities reached Okoumou, a Congolese immigrant. I hope it’s not in poor taste to say it is somewhat gratifying to see her snatched up by the people who had to risk life and limb to save her, all because she randomly decided to climb the Statue of Liberty.

JUST IN: Woman who scaled base of Statue of Liberty detained by authorities, led back down after several-hour standoff. https://t.co/VQbxWDci6R pic.twitter.com/Y18NBIxJ96

Starry-eyed admirers gush in the comments section about what  “hero” she is for the powerful “symbolism”; meanwhile, sensible people everywhere wonder what on earth she accomplished.

U.S Troops in Afghanistan Remind Us All Why We Celebrate 4th of July